Sydney FC Women Top With Four In A Row

Sydney FC have continued their impressive form with a fourth consecutive win of the season in the Westfield W-League to keep them top of the ladder.

The Sky Blues opened the scoring thanks to a Kyah Simon penalty following a foul on Remy Siemsen just after the quarter hour.

Newcastle Jets equalised within minutes of the break through Jen Hoy however the Sky Blues hit back two minutes later thanks to a remarkable overhead kick from Nicola Bolger.

The result takes the Sky Blues three points clear at the top of the ladder ahead of the result from Melbourne City’s game against Brisbane Roar tonight.

Alanna Kennedy: “It’s good to see we can still get a result and we were happy with the goals, but maybe we could have got some more out of the game today.

“Obviously we want to keep our form and get a little bit more on the ball next week but still very positive signs at the moment.”

17’ SIMON PENALTY – Siemsen is pushed over in the box and the referee awards a penalty. Kyah Simon steps up to convert into the bottom right hand corner.

46’ HOY GOAL – A scramble in the Sydney FC box and the ball rebounds to Hoy who finishes from close range.

48’ BOLGER GOAL – Kyah Simon heads down a left wing corner to Nicola Bolger who produces a fantastic overhead kick into the corner of the Jets goal.

33′ YEOMAN DALE OFF THE BAR – Gerogia Yeoman-Dale with an effort from outside the area which rattles the bar.

64′ BOLGER SHOT – Bolger carries it forward and shoots from range but the ball goes out for a corner.

73′ SIMON GOAL OFFSIDE – Leena Khamis feeds Simon who finishes but the goal is ruled out for offside – a very close call! 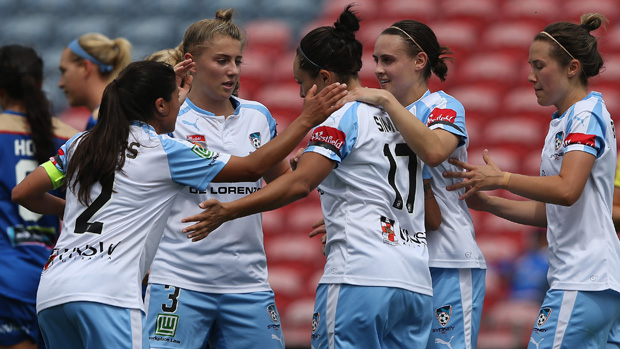