Sydney FC are within touching distance of the Hyundai A-League Premiers Plate after a 1-0 win over Melbourne Victory took them eleven points clear at the top of the ladder.

Sydney FC are within touching distance of the Hyundai A-League Premiers Plate after a 1-0 win over Melbourne Victory took them eleven points clear at the top of the ladder.

The Sky Blues could wrap up the title as early as next weekend which would make them the fastest winners of the Plate in A-League history.

Graham Arnold’s men produced a host of chances against 2nd placed Melbourne Victory and took a deserved lead five minutes after half time as Bobô rounded off a clinical counter-attack.

That goal proved enough, however the score-line could have been a lot bigger with the Sky Blues creating many more opportunities on their way to completing a clean sweep of wins over their arch-rivals this season – the first time either team has managed three wins against the other in 12 years of the A-League.

“I thought we started a little bit slow, both teams took some time to get used to the pitch. At the end of the day, I thought second half was our best performance of the season.

“We totally dominated Melbourne, we didn’t give them any time on the ball and the boys did well. We just kept the ball better, we got used to the surface better. Initially it was a bit of a dogfight in midfield.

“I thought we were very good. Once you get your creative players Ninkovic, Brosque and Bobô on the ball in that kind of form, it was pleasing to see.

“They had two or three chances to be honest, but we had some fantastic chances and the only small negative was that we didn’t kill them off, get the second and go for the third.

“There’s still 15 points to go, we’re in a great position, our destiny is in our own hands.” 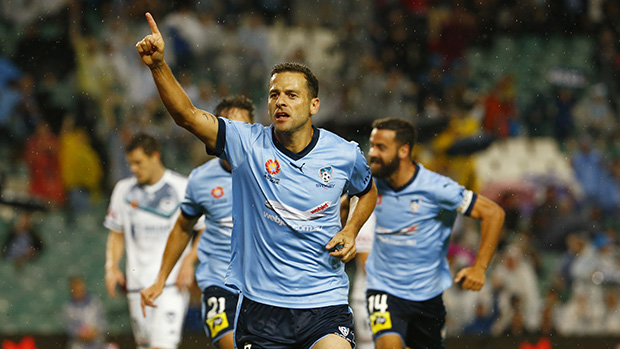 6’ HOLOSKO CHANCE – Holosko is put through on goal but his heavy touch around Thomas forces him wide and the ensuing cross is cleared.

19’ VUKOVIC SAVE – Rojas is played in behind the Sydney defence and squares the ball across to Ingham who’s shot is saved by Vukovic, denying a certain goal.

29’ HOLOSKO CHANCE – Ninkovic crosses the ball into the box but Holosko fails to put it past Thomas.

31’ BROSQUE CHANCE – Bobô plays Brosque into the box but his shot loops just wide of the far post.

32’ BOBÔ CHANCE – Zullo’s cross glances past both Bobô and Holosko with neither one of them able to provide the end product.

38’ GRANT CHANCE – Holosko tees up Grant on the edge of the box who fires a long-range effort that forces Thomas to make a diving save.

40’ BROSQUE CHANCE – Ninkovic releases Brosque whose first-time shot forces Thomas to tip the ball out and away.

58’ NINKOVIC CHANCE – Ninkovic collects the ball on the edge of the box, turns and produces a curling effort that calls Thomas into action.

60’ NINKOVIC CHANCE – From 30 metres out, Ninkovic fires a venomous volley that just grazes the top of the bar.

66’ BOBÔ CHANCE – O’Neill whips a dangerous ball in towards Bobô that the defender can only block away for a corner.

75’ GRANT CHANCE – Ninkovic plays Grant one-on-one against Thomas, but his shot is saved.

78’ BROSQUE CHANCE – Brosque drives towards goal but his shot thrashes into the side netting.

86’ BROSQUE CHANCE – Grant wins the ball inside the penalty area and cuts the ball back to Brosque, but his shot is saved.

90+1’ SIMON CHANCE – Simon cuts inside the box before firing a dangerous effort just wide of the far post.