Sydney FC will be Liverpool FC’s opposition on the Reds first ever trip to Sydney in a blockbuster game against the English Premier League giants at ANZ Stadium next month.

The World football colossus will play the huge match against the Hyundai A-League Premiers on 24th May 2017, which will be marked with activities including a rendition of “You’ll Never Walk Alone”.

The Reds currently sit 3rd in the Premier League and could head to Sydney after one of their mostly successful seasons in recent history.

Liverpool Manager Jurgen Klopp will bring a squad of first team players for the game, which is expected take place in front of a capacity ANZ Stadium crowd.

“This is an incredible opportunity for Sydney FC to play against one of the world’s greatest football clubs,” said Sydney FC Chairman Scott Barlow.

“It will be another proud moment in our history where we represent Sydney and Australia in front of sell-out crowd against a world football giant.

“It is further evidence that when the biggest football clubs on the planet come to Australia, they come to play Sydney FC.” 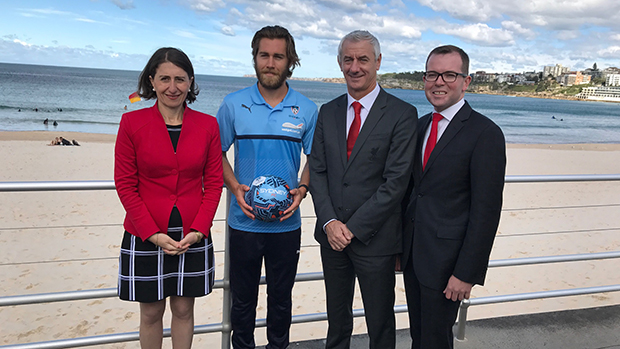 The Reds are estimated to have a worldwide fan-base of 600 million and many are expected to travel from across Australia, Asia and the globe for the game.

“It will be a fabulous occasion to see so many Sydney FC Members and fans standing side by side with Liverpool supporters,” said Sydney FC Head Coach Graham Arnold.

“Liverpool will provide our boys with a world class opposition to test their skills against.

“It will also be a fabulous opportunity to see how the best in the Hyundai A-League compare to one of the Premier League’s top four clubs.”

Sky Blues skipper Alex Brosque said: “Liverpool FC are one of history’s great football clubs and it will be an honour to walk out wearing our Sydney FC colours alongside them.

“It is a game myself and all of our team are looking forward to immensely and one our Members and fans will relish too.”

Liverpool FC Ambassador, Ian Rush is in Sydney today as part of the announcement.

“We have so many incredible fans in Australia and there is always a brilliant atmosphere when we play over here”, he said.

“The last time the first team were in Australia was 2015 and the support was phenomenal.

“The lads are really excited to get back out here and play a great game against one of Australia’s best A-league teams.”

NSW Minister for Tourism and Major Events Adam Marshall said: “This announcement, along with Arsenal FC’s upcoming tour in July 2017, has cemented Sydney’s position as Australia’s leading football destination. This is another example of the NSW Government’s commitment to building a world-class calendar of events to drive visitation to our State.”

General public tickets will go on sale at 11am Wednesday (AEST) at www.ticketek.com.au

Supporters end: The Kop (fans in The Kop identify as “Kopites” – the most vocal and passionate fans)

Fan base: Liverpool have an estimated 700m fans worldwide, with more than 200 officially recognised supporter Supporter Clubs in at least 50 countries.