Sydney FC have finished top of the AFC Champions League ‘Group of Death’ despite going down to a solitary goal from Guangzhou Evergrande at the Tianhe Sports Stadium in China tonight.

Sydney FC have finished top of the AFC Champions League ‘Group of Death’ despite going down to a solitary goal from Guangzhou Evergrande at the Tianhe Sports Stadium in China tonight.

Guangzhou’s Gao Lin scored the goal with barely two minutes on the clock to seal the win for the already eliminated 2015 Champions, in a match that Sydney FC otherwise stamped their authority on.

The Sky Blues were unable to claw back an equaliser in a particularly impressive second half showing, with Shane Smeltz, Milos Ninkovic and Brandon O’Neill all seeing efforts on target saved, however the Sky Blues qualify for the next stage of the competition top of Group H courtesy of Urawa’s one all draw against Pohang Steelers.

Sydney FC will now play Shandong Luneng in the AFC Champions League round of 16, playing the first leg away from home before welcoming the Chinese side to the Sydney Football Stadium on Wednesday 25 May for the second leg.

Graham Arnold: “It wasn’t the start that we wanted, we started slow, but overall I was very happy. I thought we played excellent tonight and we had enough chances to win the game. I thought we dominated in major parts of the game, it was just the final ball, the goal scoring.

“We made a lot of changes because of the players on yellow cards, we didn’t want to risk them, but I couldn’t be prouder. I thought we should have at least got a draw tonight, apart from the first few minutes we were just as good as Guangzhou, if not better.

“If you had said to me before we started in this ‘group of death’ that we would top the group and be ahead of Guangzhou, Urawa Reds and Pohang Steelers I wouldn’t have believed it, but we’ve worked extremely hard, our performances have been excellent in the Champions League.

“Now we get to play against another Chinese team in Shandong which will be a very tough game but we’ll be very confident after tonight, playing the richest club in China, the best club in China, performing like that.”

2’ GAO LIN GOAL – A low cross into the centre from the left wing is met first time by Gao Lin and he gives Guangzhou an early lead. 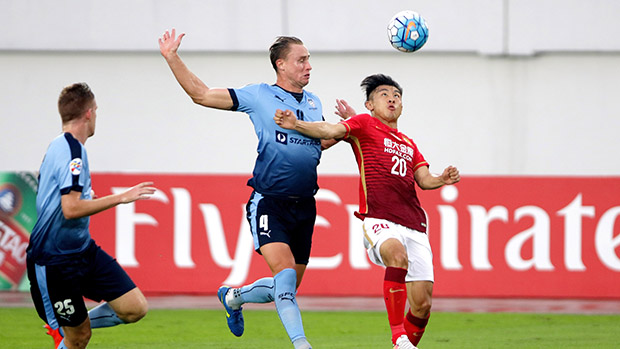 11’ DIMITRIJEVIC SHOT – The Serbian turns his marker and shoots low from distance but his effort is saved.

12’ GOULART SHOT – Goulart breaks clear in behind the defence but flashes his effort across goal.

23’ OFF THE POST – A Guangzhou curling free kick from Bowen just outside the box cannons off the post and Hanchao side foots wide with the goal gaping.

36’ NINKOVIC SHOT – Naumoff gets to the byline and clips the ball back to Ninkovic who is on the penalty spot but his goal bound volley is blocked by a defender.

38’ O’NEILL FREE KICK – O’Neill floats a curling free kick over the Evergrande wall from 25 yards but the ball is claimed by the keeper.

53’ O’NEILL TACKLE – Great sliding challenge from O’Neill prevents Guangzhou from getting a shot away in the box.

77’ HANCHAO GOAL OFFSIDE – The striker breaks clear of the defence and slots home but he is ruled offside by the officials.

85’ SMELTZ HEADER SAVED – Shane Smeltz rises highest to meet a Robert Stambolziev at the far post, however Dianzuo palms the effort away.

87’ SMELTZ EFFORT OVER – Brandon O’Neill miscues a shot at goal, with the ball flying into the path of Smeltz, however the Kiwi striker hooks the volley over the bar.

Head Coach Graham Arnold was forced to leave Seb Ryall on the sidelines after the centre half pulled out of training the day before with a tight quad.  Ryall was one of five players on a yellow card with Matt Jurman and David Carney sat on the bench while Vedran Janjetovic and Shane Smeltz in the starting line-up.  A new look back four emerged with Riley Woodcock making his AFC Champions League debut at left back, Aaron Calver moving to the centre half position alongside Zac Anderson and Rhyan Grant at right full back.  Dimitrijevic and O’Neill sat in their usual number 6 positions with Ninkovic at number 10.  Hoole on the right and Naumoff on the left made up the starting eleven.  Matt Simon is suspended for two bookings.