The Sky Blues scored twice in each half to thump the Western Australians.

Former Socceroo David Carney opening the scoring in front of the Cove in the 31st minute before Filip Holosko made it two five minutes later with an excellent solo run and shot.

The Slovakian was sent off in the second half for a second bookable offence but the ten men of Sydney FC added two more late on with some neat finishing from Abbas and Ninkovic. 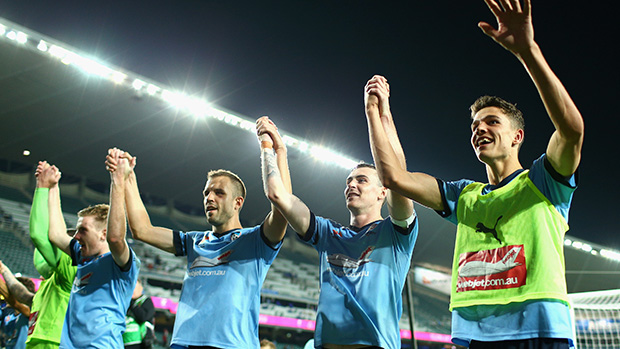 Graham Arnold: “I chopped and changed the team over the last 8 weeks to try and get through both Champions League and A-League and in hindsight looking back maybe it was too much.

“These players have pretty much played together the last three or four weeks, they’ve got rhythm and cohesion together and a performance like that was fantastic. We’ve shown that [type of football] inconsistently, last year we got 50 points and came second while this year 48-49 won it so it just shows a lot of teams have been inconsistent.

“It’s the first time I’ve missed the top 6 in five years, it’s not great, I don’t enjoy it and the fans of Sydney FC deserve better. Lets look at the positive things, and the positive things are we’re performing well at the right time and lets go for the Asian Champions League.”

31’ CARNEY GOAL – Holosko gets into a good position in the box and cuts back inside to make room for a shot.  He is disposed by Lowry who tries to clear the ball but only succeeds in firing it off Carney and the ball rebounds off Grant back to the feet of Carney who slides the ball under Covic.

36’ HOLOSKO GOAL – Holosko picks up the ball in the centre of the field and drives at the Perth defence.  He pulls the ball back onto his right foot beating Grant and slides the ball under Covic.

85’ ABBAS GOAL – The Sky Blues break and Ninkovic picks up the ball.  He plays a reverse pass to the overlapping Abbas who beats a defender to drill the ball home into the bottom corner.

91’ NINKOVIC GOAL – Hoole dispossesses Warren and moves forward down the right.  He gets to the box and crosses to Ninkovic who is unmarked and finishes easily. 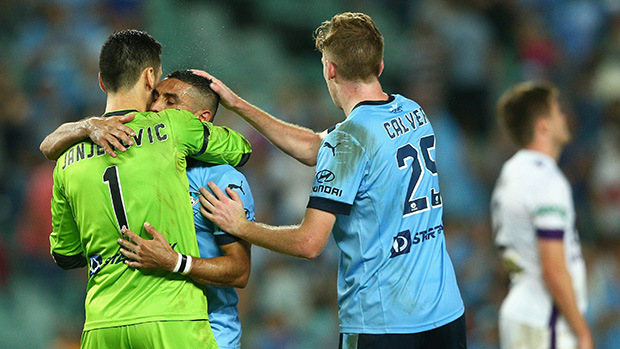 4’ SIMON CHANCE – Matt Simon is played through clear on goal.  He takes the ball into the box takes a touch and checks back inside and tries to curl the ball around Covic but the keeper saves.

8’ BLACKWOOD CHANCE – A header from Matt Simon puts George Blackwood clear, the flag initially stays down and the youngster prods the ball beyond Covic only for Warren to clear off the line however a belated flag had been raised.

17’ JANJETOVIC SAVE – A right wing corner is headed down by Keogh into the path Alex Grant but the defender can only put his header straight at Janjetovic from 2 yards out.

26’ WARREN SHOT WIDE – Garcia finds Marc Warren on the left edge of the box and the full back drills a 22 yard effort just wide of the far post.

28’ SIMON SHOT SAVED – Matt Simon turns and weaves in the box and creates room for a powerful shot which is parried by Covic and then cleared.

47’ BLACKWOOD SHOT SAVED – Simon feed Carney as the Sky Blues break, he plays in Blackwood who cuts back inside and unleashes a right foot shot which Covic dives and saves and the ball is cleared.

49’ CARNEY SHOT SAVED – Brilliant one touch football from Sydney FC working the ball between the lines with O’Neill finding Holosko, Holosko onto Blackwood who sets Carney clear and it’s only the outstretched finger tips of Covic which stops his right foot shot finding the bottom corner.

59’ CARNEY CHANCE – A lobbed ball from Blackwood to Carney puts the former Socceroo clean through but his first touch lets him down and the ball trundles through to Covic.

69’ HOLOSKO CHANCE – A clever Matt Simon header puts Holosko in the clear but the Slovakian chooses to pull the ball back rather than shoot and finds no one with the pass.

76’ WARREN SHOT – Marc Warren over hits a cross which almost catches Janjetovic out and the keeper has to back peddle to tip over the bar.

78’ HOLOSKO SENT OFF – The Slovakian is shown a second yellow card after appearing to hold onto the ball as Covic tried to take a goalkick.

80’ KEOGH SHOT OVER – A bouncing cross comes over the penalty area from the Perth right and falls to Keogh who volleys over.

90’ + 2’ NINKOVIC VOLLEY – Matt Simon charges down the Sky Blues right and crosses to Ninkovic who is at the far post who hits a superb first time volley which Covic saves brilliantly.

Sydney FC Head Coach Graham Arnold made three changes to the starting line-up that faced Pohang Steelers four days earlier.  Match winner Milos Ninkovic dropped to the bench and was replaced up front by George Blackwood.  Rhyan Grant was rested at full back and was replaced by Aaron Calver while Filip Holosko returned on the wide right in placed of Andrew Hoole who also found a spot on the bench.