Sydney FC gave Adelaide United a Boxing Day football lesson with a 4-0 thrashing at Coopers Stadium to go nine points clear at the top of the Hyundai A-League and earn the record for the best ever start to a Hyundai A-League season.

The Sky Blues proved there was no Christmas hangover scoring four goals for the second successive away match.

Filip Holosko opened the scoring in the first half, before Alex Brosque bagged a second half double and Rhyan Grant notched a brilliant team goal.

The win makes it the best ever start to a Hyundai A-League season after going 12 games undefeated and leaves Sydney FC with a goal difference of +24.

The Sky Blues have now set up a first versus second clash against Brisbane Roar at home at Allianz Stadium on December 30th.

Graham Arnold: “That’s eight goals in two away games.  We’ve been ruthless.  When you have competition for places and the key indicator is performance, then the players will push each other and it’s a joy to watch.

“The team is the most important thing and the individual comes second and that’s the mentality I want in the changing room.

“We’ve got a tough game on Friday night against Brisbane Roar and we will put on a performance like that.”

Milos Ninkovic: “Confidence is high and last week we played very well against Perth and we continue to show these performances since the beginning of the season.

“It’s a great result and everyone wants to beat us and we just have to keep going and show the same level of performance.” 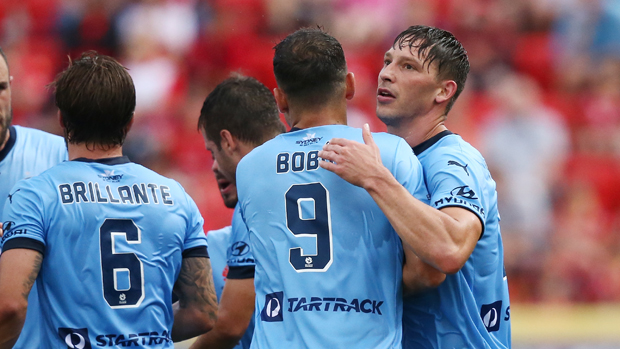 34’ HOLOSKO GOAL – Holosko hits a free kick on the edge of the box straight at the wall and when Grant floats the ball back into the box, the Slovakian chests the ball down and hits a hard low shot beyond Galekovic.

53’ BROSQUE GOAL – Holosko plays a fabulous ball behind the defence to set Ninkovic clear on the left. The Serbian bursts into the box and crosses to Brosque to finish from close range.

64’ GRANT GOAL – Grant wins the ball in his own half and combines with Brillante and Brosque who finds Ninkovic, he returns to the ball to Grant who had continued his run into the box and he takes his time to finish left footed.

66’ BROSQUE GOAL – Adelaide United give the ball away in defence and Jurman plays the ball to an unmarked Holosko. He shoots but hits the post and Brosque is quickest to react and finish.

3’ BROSQUE CHANCE – Good play on the left from Sydney FC and Holosko finds Brosque inside the box but he has to rush his shot under pressure from La Rocca and it goes wide.

22’ CIRIO CHANCE – Garuccio bursts into the box on the left hand side and his cross deflects to Cirio on the edge of the box for a free shot on goal but he hits it straight at Vukovic.

23’ BOBÔ CHANCE – Great turn and shot by Bobô inside the box but it’s at Galekovic who parries the ball behind for a corner.

23’ BROSQUE CHANCE – A scramble from corner falls to Brosque who is just three yards out from goal but he fails to get a good connection on the shot and Adelaide clear.

45’ GRANT CLEARS LINES – An Elrich cross from the right is sliced over his own bar by Rhyan Grant.

45’+1’ GUARDIOLA CHANCE – A left wing cross beats everyone and Guardiola can only skim his header wide of the post when he should have scored.

90′ + 1′ VUKOVIC SAVE – Kitto tries to flick home a cross but Vukovic reacts brilliantly to get a hand to the ball.

Head Coach Graham Arnold made two changes to the starting line up from the team that defeated Perth Glory nine days earlier.  Josh Brillante and Matt Jurman returned to the park with Seb Ryall and Brandon O’Neill dropped to the bench. Matt Simon returned on the bench at the expense of David Carney.