Sydney FC star Adrian Mierzejeski has been named in EA SPORTS FIFA’s Team of the Week after his superb performance against Western Sydney Wanderers in the Sydney derby.

Sydney FC star Adrian Mierzejeski has been named in EA SPORTS FIFA’s Team of the Week after his superb performance against Western Sydney Wanderers in the Sydney derby.

The Polish international levelled the match at 1-1 in the 44th minute with a stunning free kick that catapulted into the bottom of the crossbar and ended up in Vedran Janjetovic’s goal.

The 31-year-old then gave the Sky Blues a 2-1 lead in the 55th minute when he slammed home a shot from just inside the box. Mierzejeski was only denied a hat-trick after a flying save from Janjetovic 10 minutes later.

But the brace brought up the Sky Blues attacker’s 12th goal of the season and earned him a place in the FIFA Team of the Week.

“I’m very happy to make the Team of the Week, especially coming off the back of the Derby win,” Mierzejweski said.

“I’m very happy my goals helped get me into the team, and I know I will see more of my Sydney FC team mates in the squad in the future.”

Mierzejeski has been awarded a player card with an overall rating of 82 with impressive pace (83), shooting (83), dribbling (84) and passing (82) statistics. 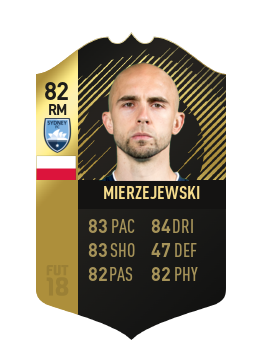 Will Sydney FC’s E-League players choose to include the attacker in their teams? Watch E-League Round 3 on the E-League Twitch channel from 8pm AEDT on Thursday to find out!