Sydney FC have moved six points clear at the top of the Hyundai A-League following a 2-0 win over the Newcastle Jets at MacDonald Jones Stadium.

The Sky Blues, who face 2nd placed Melbourne City at ANZ Stadium next Friday night, dominated the game and hit the woodwork twice among their numerous chances.

Man of the match Milos Ninkovic and Bernie Ibini hit the target for the Sky Blues with two excellent individual goals.

Milos Ninkovic: “It was a very important win, especially after three games in seven days but we had a very good performance and I think we deserved the win.  We will keep going.”

Bernie Ibini: “It’s massive for myself, I worked very hard to get back and to win the game and to top it off with goal is fantastic.” 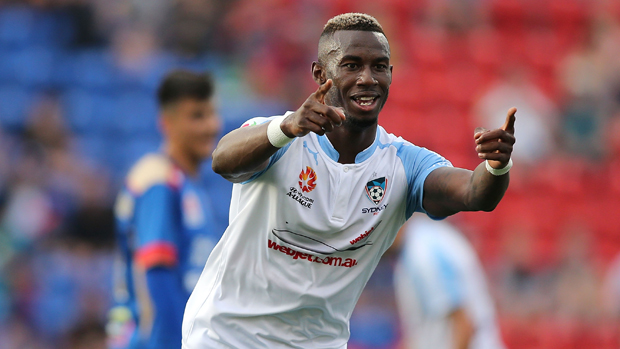 63’ NINKOVIC GOAL – The Serbians combine, Dimitrijevic feeds Ninkovic and the latter dances his way through the Jets defence into the edge of the box before curling the ball into the corner with a sublime finish.

79’ IBINI GOAL – Ibini beats two defenders at the byline, then a third as he heads towards goal. He hits a shot with his right foot which Duncan saves at point blank range but it falls to Ibini again who sticks it home with his left foot.

4′ GRANT CHANCE – Loose ball in the Jets area is played out only to Rhyan Grant but he fires high and wide.

19′ GRANT HEADER – Great deep cross from Zullo finds Grant at the far post and his powerful header is saved.

24′ BROSQUE SHOT – Brosque is played through via a long ball over the top and he takes a touch before firing low.

30′ RYALL CHANCE – Ryall latches on to a flick on off a Carney corner but he can’t direct his header.

67’ OFF THE BAR (WILKINSON) – A in-swinging Dimitrijevic free kick from the left hand flank is flicked towards goal by Wilkinson but Duncan makes a fantastic save to tip the ball onto the bar.  The rebound eventually falls to Ryall and from a difficult angle he twists his body to flick the ball just wide.

74’ OFF THE BAR AGAIN (NINKOVIC) – Brosque gets into a good position down the right hand side and crosses to Ninkovic who hits it first time against the bar with Duncan left stranded.

81’ GRANT SHOT – Grant receives the ball back from Bobô inside the box after bombing down the right hand side.  He gets into the box into a shooting position but Duncan tips the ball over the line.

With the Sky Blues approaching their third game in a week and another game in just five days against Melbourne City on Friday night at ANZ Stadium, Head Coach Graham Arnold made a number of changes.  Matt Jurman, Brandon O’Neill, Bobô and Filip Holosko all made way with David Carney, George Blackwood, Alex Wilkinson and Milos Dimitrijevic all coming into the starting line-up.  Ibini returned to the bench.