Ordega is the first African player to play in the Westfield W-League and joins the Sky Blues on the back of winning a third Africa women’s Cup of Nations title, in front of 40,000 fans in Cameroon earlier this month.  Francisca made the team of the tournament.

The 23-year old forward has been capped 26 times for the Nigerian national team and also boasts experience at two FIFA Women’s World Cups (2011 and 2015), featuring against the Westfield Matildas in the 2015 tournament as Sky Blues teammate Kyah Simon scored twice to down the Super Falcons.

She spent the last two seasons with Washington Spirit in the National Women’s Soccer League (NWSL) in the United States of America.

Ordega is excited for her first season in Australia with Sydney FC.

“I’m really pleased to be signing with a club of Sydney FC’s stature,” she said.

“I’ve heard great things about Sydney FC and the Westfield W-League and I’m really excited to be in Australia for the first time.

“I’ve played against the Matildas and I know the quality of players Australia produce. I know it’s going to be a challenge playing in the Westfield W-League but it’s one I’m looking forward to.” 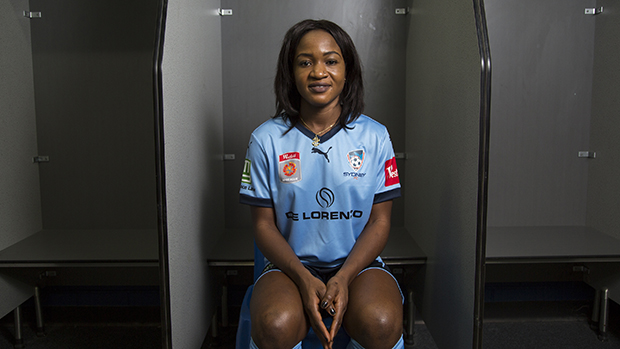 Sky Blues Westfield W-League Head Coach Dan Barrett said he was excited by the qualities Francisca brings to the squad and he hopes to play her in Friday night’s home clash against the Brisbane Roar at Lambert Park (kick off 7:30pm).

“Francisca is an exciting player who is going to bring a lot of attacking flair and speed to our team,” he said.

“She’s a player who’s got that cutting edge and is the finishing touch to what is already a fantastic attacking squad.

“She’s gives us another dimension up top, she likes to get in behind the back four and is an attacking weapon who brings something different to the squad.

“She will give us a huge lift as we head into the business end of the season.

“Francisca will train with us on Thursday and if she gets through that alright we’ll look to get her to play some part in Friday night’s game against the Roar.”

Sydney FC take on Brisbane Roar at home at Lambert Park, Leichhardt on Friday 23 December (kick off 7:30pm). Use your Membership for entry or get your tickets at the gate and be there to support your Sky Blues.