Sydney FC has begun a new era in the club’s history with the unveiling of a new logo and renewal of a ten-year lease with Allianz Stadium.

The Sky Blues new logo is an evolution of the existing crest and represents an iconic club for an iconic city.

Chairman Scott Barlow believes the design will provide fresh impetus and drive to Sydney FC as the club moves into the next phase of its development.

WATCH: We Are Sydney – The New Logo

“This new crest represents a coming of age for our club. It is an evolution of the previous design with a number of respectful nods to the past,” he said.

“It is a premium and authentic football crest that will stand the test of time and be a true reflection of our club and our identity.

“We are proud to represent one of the world’s truly iconic cities and we now have a crest that emphasizes that. An iconic club for an iconic city.

“A big thank you to those Sydney FC members who were involved throughout the design process.”

The logo reveals the sails from the Sydney Opera House as seen from the Sky Blues home ground of Allianz Stadium with the Federation star remaining a feature from the previous badge.

“It is important the club is continuing to evolve and grow as we improve as a team after the fantastic season that we have experienced.

“The city of Sydney is a big, beautiful and iconic city and this logo represents it very well.” 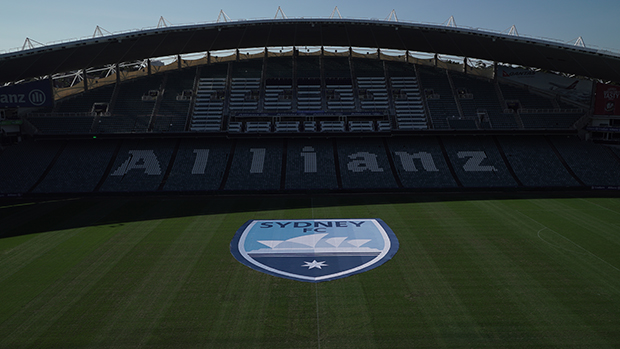 Club captain Alex Brosque is delighted with the new look.

“I really like the design, the colours are our traditional colours.  I think it’s a very modern logo.

“I showed a couple of the boys and we were impressed and will be extremely proud to wear it next year.”

A recurring theme in recent conversations with Members and supporters at club forums has been the need for a new and improved crest and a select band of Members helped in the consultation towards the new logo.

Sydney FC and Cove Member Brendan Slowey was part of the consultation group and says the logo looks fabulous.

“It’s been an honour for The Cove to be part of the process of the redesign of the club’s crest.

“The club wanted something that would be timeless but that also honoured the crest which came before. We feel strongly that this design achieves that.

“We look forward to seeing it on our shirts along with the golden A-League Champion badge.”

The club will be phasing in the logo over the next few weeks with the official changeover set to happen on July 1 and the crest to appear on next season’s new team kits.

Sydney FC have also reached an agreement with the Sydney Cricket and Sports Ground Trust for the club to continue to use Allianz Stadium as its home ground for the next ten years.

“Allianz Stadium is a fantastic venue and one we are very proud to call our home,” said Barlow.

“We have had some great occasions playing at this stadium, none more so than winning the A-League Championship last weekend and I envisage we will have further success in the future.”

SCG Trust Chairman Tony Shepherd said: “Sydney FC have grown into one of the city’s biggest sporting clubs and we’re delighted that they will call Allianz Stadium home for the next decade.

“Their passionate fan base continues to grow, with more than 256,000 supporters cheering on the Sky Blues this season at one of the best football venues in the country. The atmosphere and excitement that the club’s supporters create at every event is unique in Australian sport.

“Football has a long and proud history at Moore Park and we’re excited to see Sydney FC build on that heritage in the years to come.