Sydney FC have become the fastest team to reach 50 points in Hyundai A-League history with a 3-1 win over Melbourne City at AAMI Park.

A double for Brazilian marquee Bobô and a sublime freekick from midfielder Brandon O’Neill did the damage for the Sky Blues who move eleven points clear again at the top of the ladder.

Manny Muscat was sent off for the hosts in the first half with the score at 1 all after Fitzgerald had equalised Bobô’s penalty.

The Sky Blues now face Melbourne Victory at home next Friday night in a game which will go a long way to deciding the direction of the Premier’s Plate. 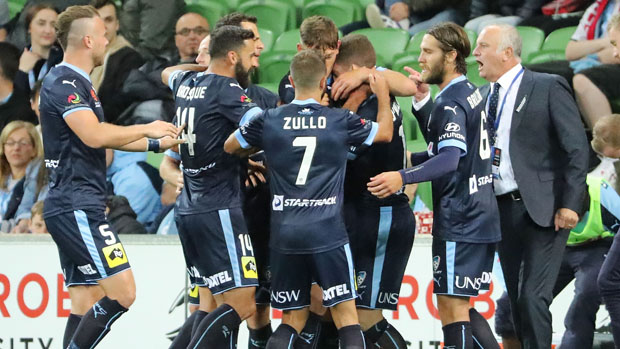 Bobô:  “It was a fantastic game for us and three points away for us is perfect.

“Today this game is very important because last week we lost and this is good for confidence.”

Alex Wilkinson: “Once we got the goal I thought we grew in confidence.

“The red card changed the game and second half we moved them around a bit and scored a couple of goals, but great to be back to winning ways.”

24’ BOBÔ GOAL – Holosko gets clear and one on one with Sorenson but is brought down by Muscat in the box.  Gillett points to the spot and Bobô sends the keeper the wrong way.

26’ FITZGERALD GOAL – Fitzgerald gets a lucky ricochet on the edge of the box and the ball sits up nicely for him to volley the ball into the corner with the outside of his boot.

57’ O’NEILL GOAL – O’Neill curls a right footed free kick on the edge of the box over the wall and into Sorenson’s top right hand corner.

67’ BOBÔ GOAL – A phenomenal switch ball from Ninkovic through the legs of Tongyik releases Bobô who lets the ball come across his body before finishing first time. 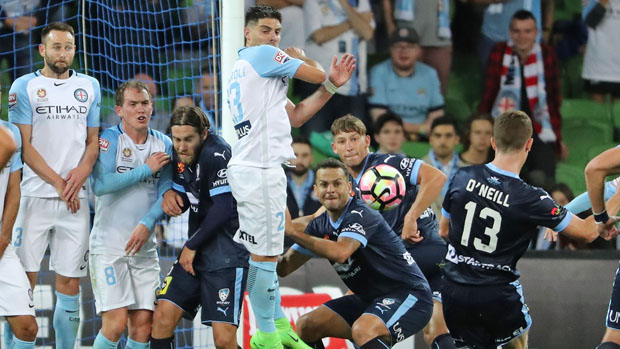 16’ NINKOVIC HEADER – Buijs swings over a right footed corner which Ninkovic flicks on towards goal but Franjic gets a touch to send the ball over.

39’ MUSCAT SENT OFF – Brosque dispossesses Muscat who pulls the striker back as he goes clear and the defender receives his second yellow card, having been booked for giving away the penalty.

51’ NINKOVIC SHOT – Grant wins back possession and cuts the ball back to the edge of the box to Ninkovic who shoots first time but Tongyik blocks.

52’ O’NEILL SHOT – Brandon O’Neill shoots from range and Sorensen plucks it from the air.

80’ GREAT SAVE VUKOVIC – Brandan jinks his way through the Sydney FC and pokes a ball towards the far post but Vukovic is down quickly to get his hand to the ball.

84’ VUKOVIC SAVE – Fornaroli attacks the Sydney FC defence and looks to bend a shot inside the far post with his right foot but Vukovic dives and catches the ball.

86’ ZULLO SHOT – Good build up play from Sydney FC and Ninkovic with a cheeky back heel to Zullo who shoots from the edge of the box but Sorenson saves.

92’ CARNEY SHOT – Carney shoots from close range curling a left foot shot towards the far post but a superb Sorensen fingertip save denies him. 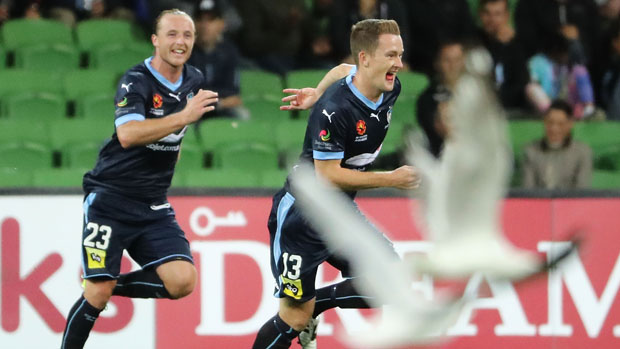 Head Coach Graham Arnold named an unchanged side to the one that played the Sydney Derby last Saturday.