Sydney FC are a whisker away from qualification for the last 16 of the AFC Champions League for the first time in their history after a 1-0 win over Pohang Steelers at the Sydney Football Stadium tonight.

Sydney FC are a whisker away from qualification for the last 16 of the AFC Champions League for the first time in their history after a 1-0 win over Pohang Steelers at the Sydney Football Stadium tonight.

A Milos Ninkovic goal early in the second half secured the Sky Blues historic third consecutive win in the AFC Champions League – a first for the club – to secure top spot in Group H with nine points from four games.

Graham Arnold’s men dominated the game against a Korean outfit who sit third in the group on four points.

In the Group’s other game Urawa Red Diamonds defeated Guangzhou Evergrande 1-0 to move into the second on the ladder on seven points, leaving the Chinese club rooted to the bottom of the four team group with two points. 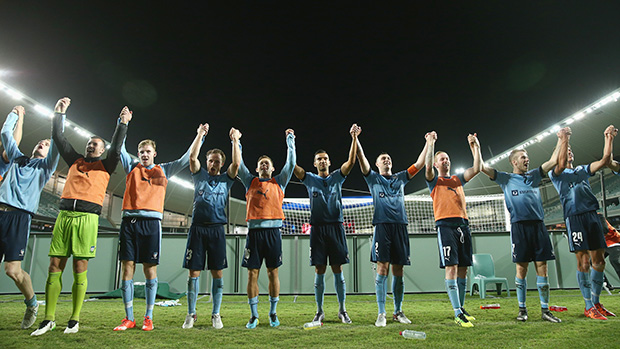 Graham Arnold : “It was a difficult surface to play on but I thought we adapted well to it. We had very good discipline, a good effort and they played very well to the structures and game plan and overall I’m very happy.

“They changed their system which gave us a bit more space and I thought we adapted well in the second half. We played their full strength over there and beat them 1-0, they’ve got a 20-30 million dollar budget, they’ve got quality players and a lot of depth.”

“I’m just happy for the players, they’ve worked so hard, they’ve done their best every week and haven’t been rewarded so tonight’s a reward for them. We’re not there yet, I want us to finish on top of the group.”

51’ NINKOVIC GOAL – Good play between O’Neill and Hoole who finds Ninkovic darting into the box. The Serbian allows the ball to come out from under his feet to poke the ball beyond the Korean keeper with his left foot.

11’ HOOLE CHANCE – A cross from the Sydney FC left is floated towards Matt Simon who had pulled off at the far post.  A Pohang defender managed to get his head to the ball to cut it out but could only head it back towards Hoole on the edge of the box.  He had an excellent chance at a volley towards goal but opted to take a touch and the chance was gone.

29’ DONGHYEON CHANCE – Donghyeon drives into the six yard box towards Janjetovic and shoots from a tight angle but the keeper has his angles right and saves with his legs.

36’ HOOLE CHANCE – Simon gets the ball to Hoole who runs at the Pohang defence and gets to the byline.  He scrambles to cut the ball back to the edge of the six yard box but there’s a defender in the way and he manages to clear.

55’ JANJETOVIC SAVE – A quick free kick almost catches the Sydney FC defence unaware but Janjetovic is out quickly to save at the feet of the Jeho.

57’ RYALL HEADER CLEAR – A cross from the right almost falls to the Pohang strikers but Ryall gets in a last ditch header as three hover.

61’ SIMON HEADER OVER – A great cross from the left from David Carney finds Matt Simon unmarked but he finds it hard to get power on the ball and it goes over.

73’ JURMAN SHOT SAVED – A left footed Carney cross from the left side is headed up in the air and falls on the volley to Jurman who hits a superb shot which Jinyoung dives to make a superb save.

76’ CARNEY SHOT WIDE – An excellent turn and shot from Carney goes just wide of the post.

88’ STAMBOLZIEV CHANCE – Stambolziev releases Blackwood who cuts it back to Stambolziev but the defender slides in.

90+1’ BLACKWOOD GREAT CHANCE – O’Neill releases Blackwood who shoots from close range but it’s into the keeper’s chest and Grant with the follow up hits it straight at the keeper again. 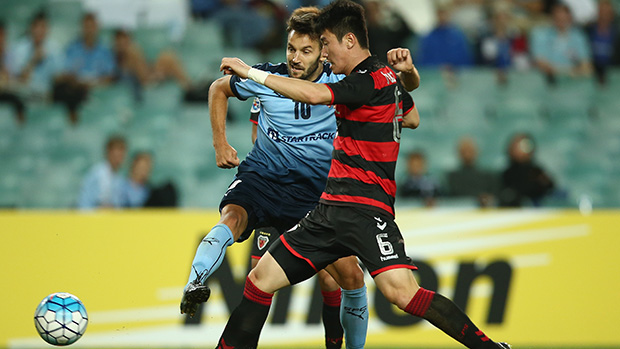 Sydney FC Head Coach Graham Arnold has made eight changes from the youthful starting XI that faced Adelaide in Round 26 of the A-League. Stand-in skipper Seb Ryall partners Matt Jurman in the centre of a rejuvenated back four, replacing Jacques Faty and Zac Anderson. Faty is not part of the Asian Champions League squad, while Anderson takes a place on the bench. Ali Abbas and Rhyan Grant replace Aaron Calver and Riley Woodcock to round out the back four. In the centre of the park, Milos Dimitrijevic holds his place alongside the returning Brandon O’Neill, replacing Mullen who is not in the match day squad. Andrew Hoole replaces Filip Holosko on the right, who is also not eligible due to ACL’s foreign quota; while on the left, David Carney regains his spot at the expense of Christopher Naumoff, who is not in the match day squad. Milos Ninkovic retains his spot in the front two; while Shane Smeltz is relegated to the bench for Matt Simon.