Sydney FC has reached the first FFA Cup Final in their history after a comfortable 3-0 defeat of Canberra Olympic in the nation’s capital tonight.

Sydney FC has reached the first FFA Cup Final in their history after a comfortable 3-0 defeat of Canberra Olympic in the nation’s capital tonight.

Goals from Seb Ryall, Milos Dimitrijevic and an emotional strike for Bernie Ibini, returning after almost 18 months out with an ankle injury, secured the FFA Cup Final spot.

The Sky Blues could have had more with skipper Alex Brosque hitting the post and a resilient Olympic goalkeeper making a number of saves.

The win was eventually put beyond doubt in the 81st minute with Ibini’s strike, seven minutes after he came on as a substitute, setting up a mouth-watering final against either Tim Cahill’s Melbourne City or Melbourne Victory.

Graham Arnold: “It’s the first FFA Cup Final in the history of the club and it’s a wonderful feat for the players and for the club.

“That’s six wins and we are yet to concede a goal this season and we are scoring goals freely.  We missed our chances tonight and could have put Canberra away in the first half when we had the chances but overall it’s a pleasing result.

“I make no secret that I couldn’t be happier for Bernie Ibini.  He’s been out for a long time and has come back to Australia to get fit and healthy again.

“He’s only 30 to 40 percent of where he’ll end up but the kid has worked extremely hard and the medical staff have done a fantastic job on Bernie.  To see him finish it off there and score a goal makes it a special night for him.” 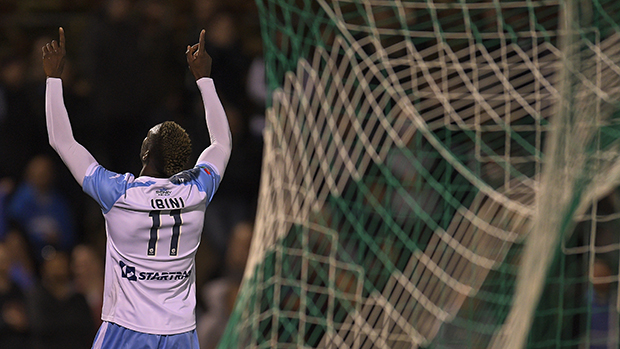 23’ RYALL GOAL – Short corner from Carney to Grant on the edge of the box who clips a ball into the centre which is met by the head of Ryall.

65’ DIMITRIJEVIC GOAL – Bobô wins a free kick on the edge of the box and Dimitrijevic steps up to curl the ball right footed into the top corner.

81’ IBINI GOAL – Brosque plays Simon in down the left wing and the striker bursts towards the penalty box before playing in a fantastic cross to Ibini at the far post to finish first time.

22’ BOBÔ SHOT SAVED – Fabulous run and interchange play from Rhyan Grant on the right who finds Bobô slightly wide in the channel.  The Brazilian tries to slide the ball past the keeper but he comes out and blocks.

31’ BOBÔ SHOT SAVED – A ball forward from Grant is inch perfect for Bobô and the striker lets it come across his body to shoot but the keeper is equal to it from close range.

41’ BROSQUE HITS POST – Brosque reacts first to a bouncing ball forward to lift it over the keeper who had come off his line.  Brosque then applied the finishing header but watched in agony as the ball bounced off the post.

52’ CARNEY SHOT SAVED – Carney runs at the full back from the left and hits a cross which is deflected towards goal but the keeper gets a leg to it to nudge it behind.

63’ BROSQUE SHOT SAVED – Carney clips the ball in to Brosque on the edge of the box and the Sky Blues captain controls on his chest before volleying a shot which the keeper parries to safety.

74’ IBINI ENTERS FIELD – Bernie Ibini comes on as a substitute after almost 18 months without playing a competitive game through injury.

86’ CARNEY BLAZES OVER – Great play from Ibini on the right wing releases Grant to the byline. The full back pulls the ball back for Carney who shoots over from the penalty spot.

88’ VUKOVIC SAVE – An attempted chip from Cattanach has the keeper back peddling but he gets to the ball to tip over.

89’ BLOCKED ON THE LINE – Referee Beath awards Canberra a free kick just inside the six yard box. With every Sydney FC player on the line Olympic take the free kick but it is blocked three times on the line with Woodcock amd Vukovic in the thick of it.

Head Coach Graham Arnold made four changes to the team that started against Central Coast Mariners on Saturday night.  Alex Brosque came in for his first start of the season in place of Milos Ninkovic.  Riley Woodcock replaced Michael Zullo at left back with Zullo still suffering from a virus. Seb Ryall came in for Alex Wilkinson after the centre half limped off with an ankle injury during Saturday’s game.  Milos Dimitrijevic replaced Josh Brillante for some game time with the young midfielder sitting on the bench.  Bernie Ibini appeared on the Sky Blues bench and was set to make his first competitive appearance in almost 18 months.