Sydney FC will continue their record of having played in every single Westfield W-League finals series after defeating the Newcastle Jets 2-0 at ANZ Stadium.

Goals from Kyah Simon and Leena Khamis mean the Sky Blues have secured a Westfield W-League finals berth with one game still to play.

Simon struck in the first half after the Jets’ Hannah Bromley gave away a penalty, before Khamis headed home a second after the break.

The Sky Blues will be the only club to have played in all 8 Westfield W-League Finals series and travel to Melbourne City next weekend for the final game of the regular season.

Dan Barrett: “I’m very, very happy.  The first step in the plan is to make the Finals and I think we deserve to be there. The game was stretched and I think that was due to the size of the pitch.  We wanted to make sure that we played a little closer together, to make sure we were a bit more connected and I think once we did that we made it very difficult for Newcastle.

“Alanna Kennedy played very well today having come into the game under an injury cloud and Teigan Allen had a very, very strong game.”

33’ SIMON PENALTY – Bromley elbows Khamis in the face inside the area bringing her to the ground.  The referee awards a penalty which Kyah Simon puts to the keeper’s left, sending her the wrong way.

57’ KHAMIS GOAL –  Spencer floats a great ball into the area and Khamis is left free to head home. 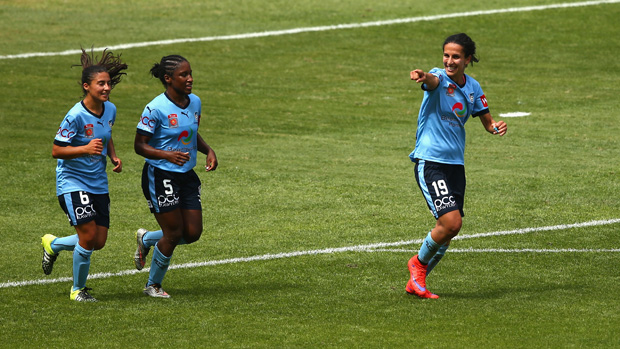 19’ BOLGER SHOOTS OVER – Simon releases Ibini on the right wing who crosses to Bolger to shoot.  The initial shot is blocked but she gets a second chance which she volley’s just over the bar.

24’ SPENCER SHOT SAVED – Khamis finds Ibini on the edge of the box who lays it off to Spencer who shoots on the left angle inside the box but Southwell parries and the ball is cleared.

25’ SIMON SHOT SAVED – Kyah Simon turns and runs at the Jets defence before unleashing a shot which is heading for goal but Southwell catches the ball.

41’ BOLGER CHANCE – Simon and Bolger combine as Bolger goes one on one but Southwell recovers to save.

52’ BETOS SAVE – Brave work from Michelle Betos as she dives at the feet of the strikers to save Dydasco’s cross.

71′ SIMON CHANCE – Spencer breaks into the area and cuts the ball back to Kyah Simon but she fires wide.

76’ BETOS SAVE – Gema Simon shoots from a free kick on the edge of the box but Betos is down quickly to save.

91’ BETOS SAVE – Copus-Brown gets in behind Allen and fires in a shot from an acute angle but Betos saves from a tight angle to push the ball around the post.

Sydney FC Head Coach Dan Barrett made one change to the starting side that defeated Melbourne Victory at AAMI Park as Elizabeth Ralston came into the lineup in place of Amy Harrison following a serious knee injury that sees the 2014/15 Westfield W-League Young Player of the Year ruled out for the season. Barrett otherwise named an unchanged team and bench with only one round remaining in the regular season.

Sydney FC Memberships are now on sale for the Hyundai A-League season 2015/16.  Click here to become part of the Sky Blues family.