Sydney FC can confirm young defender Aaron Calver will remain a Sky Blue until the end of season 2018/19 after the 21 year old inked a new two year deal today.

One of the Sky Blues’ youngest ever Hyundai A-League debutants, the Helensburgh junior has been a feature of the Sky Blues set up since 2012, progressing through the youth ranks before securing a professional contract.

Calver has gone on to feature in the Sky Blues defence in both the Hyundai A-League and AFC Champions League for the past five seasons, expertly marking the likes of Guangzhou Evergrande’s Jackson Martinez and Melbourne City’s Tim Cahill.

The Hyundai A-League 2016/17 Premiership and Championship winner said he was excited to be signing on for a further two years.

“It’s really pleasing to be staying a Sydney FC player for the next two seasons,” Calver said.

“I’ve learnt a lot and developed as a player since I joined the first team, and I’m glad to be able to continue that under Arnie.

“This last season has been massive and I just want to be a part of that again, carry our form over into the new season and into Asia as well.” 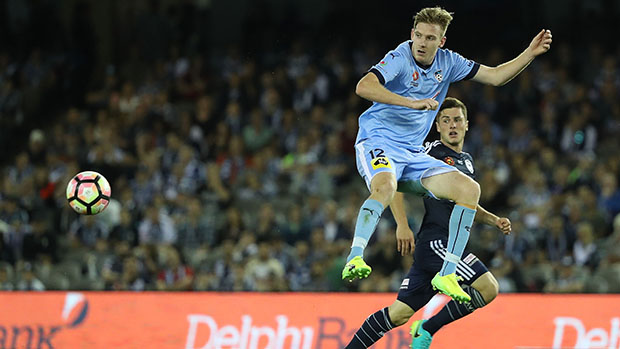 Head Coach Graham Arnold praised Calver’s attitude and said he was glad to have the youngster committed.

“Aaron is a fantastic kid and it’s great to have him on board for the next two years,” Arnold said.

“Aaron provides us with another option in defence which will be crucial during our dual A-League and AFC Champions League campaigns and I’m looking forward to continuing to work with him.”

Calver will report with the rest of the Sydney FC Hyundai A-League squad for pre-season training in July before facing Arsenal FC at ANZ Stadium on Thursday 13 July.

Elsewhere Sydney FC can also confirm forward George Blackwood has left the club.  Sydney FC would like to thank George for his efforts and commitment to the Sky Blues and wish him well for the future.