Sydney FC has made a huge statement of intent for the Hyundai A-League 2017-18 season with the re-signing of Johnny Warren Medalist Milos Ninkovic.

Just two days after the Sky Blues clinched the Hyundai A-League Championship for a record equalling third time, the Serbian has put pen to paper on a one year international marquee deal.

Chairman Scott Barlow believes it shows the desire of the club to keep its best players and continue to set the standard in the Hyundai A-League.

“Sydney FC has undoubtedly raised the bar with our record-breaking season and we want to continue to set the benchmark,” he said.

“Milos Ninkovic has had a fantastic season and is a key player in the success we have achieved at Sydney FC.

“We want to build a legacy in football in this country and by keeping our very best players we are taking a huge step towards that aim.” 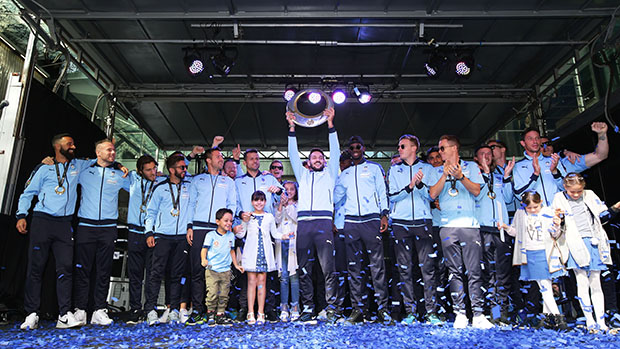 “Milos has proven to be a class above this season and his understanding with the rest of our strike force will only continue to flourish.

“It is a huge tribute to Sydney FC, our staff and the culture we have at the club, that after such a fabulous season, he has agreed to come back for another year.

“It is an exciting time to be a Sydney FC supporter with the AFC Champions League coming up and a chance to further assert our command on Australian football.”

Ninkovic, the Hyundai A-League’s best player and Johnny Warren medallist, said he was delighted to be staying with the Sky Blues for a third season.

“I love this club, I love this city, I love my team-mates and I love our wonderful Members,” he said.

“This season has been the most special of my career and long may it continue.

“We have a fantastic squad and we want to stay together and continue to create history.”

Ninkovic scored the match wining penalty in Sunday’s Hyundai A-League decider and will return home to Serbia this week before coming back to Sydney for pre-season training in July.