Sydney FC Out In Semi Finals

Sydney FC’s Westfield W-League team have missed the chance to reach a second successive Grand Final going out of the competition in the semi-finals.

Kyah Simon opened the scoring in a dominant opening period for the Sky Blues however a Di Bernardo penalty levelled the game at half time.

Perth Glory scored early in the second half through an own goal from Alanna Kennedy and as Sydney FC tried to get back into the game, the home side struck three more times to send Dan Barrett’s side out.

Alanna Kennedy: Obviously we’re disappointed, I think we were one of the most consistent teams coming into the last few games but unfortunately lost our form at the wrong time.

“We had an excellent week of training and we worked on what we needed to execute in the front third. We did that early but it didn’t carry through to the whole game.” 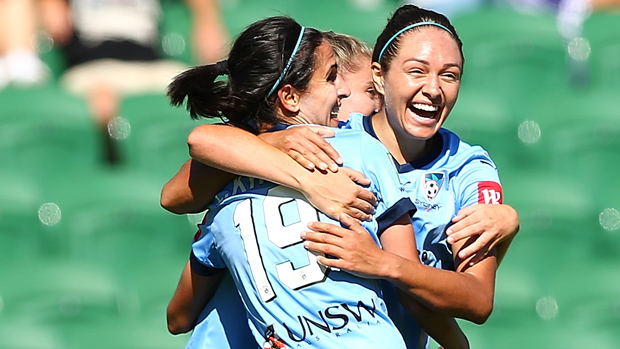 23’ SIMON GOAL – Caitlin Foord goes clear in the box and gets to the byline.  She cuts it back to Siemsen who takes a shot but it’s blocked and ricochets into the air for Simon to acrobatically fire home.

29’ DIBERNADO PENALTY – Yeoman-Dale brings down Mautz in the box and a penalty is awarded. Dibernardo steps up to slot home from 12 yards.

58’ KENNEDY OWN GOAL – Alanna Kennedy attempts to clear a ball from the right but miscues and slices the ball over Coelho into the net.

77’ DIBERNARDO GOAL – Sam Kerr puts in a dangerous cross which is cleared but only as far as DiBernardo whose initial shot is blocked but she makes it count at the second attempt.

79’ SUTTON GOAL – Kerr drives at the Sydney FC defence and shoots from range. Coelho parries but Sutton is there unmarked to finish.

93’ BILLAM GOAL – A fantastic strike from range beats Coelho and drops in off the bar. 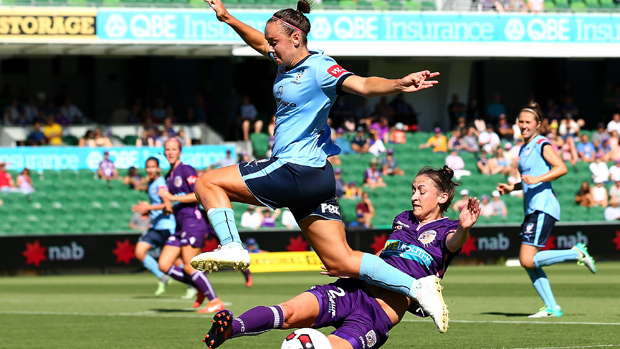 9′ SIMON HEADER CLOSE – Cross comes in from the left and Kyah Simon sticks a header just wide of the post.

24’ FOORD CLOSE AGAIN – Caitlin Foord is clear in the box immediately after Sydney FC’s opener but she slips as she goes to shoot.

43’ GREAT SAVE COELHO – Kerr goes through but is under pressure from Kennedy however she manages to shoot from close range at the near post and Coelho makes a fantastic one handed save.

66′ KERR CHANCE – Sam Kerr gets 1 on 1 with Coelho but Alanna Kennedy is back with a last ditch tackle.

Following her two goals last week Remy Siemsen came into the starting line-up with Leena Khamis and Caitlin Foord, while new signing Claire Coelho won the battle to replace Sham Khamis in goal with the latter missing the game on medical grounds having suffered concussion during last weekend’s Adelaide game.