The match was the young Sky Blues’ third in seven days following a mid week catch up fixture and the heavy load seemed to take its toll.

Sydney looked solid in the 1st half and controlled the majority of the opening stanza and half way through Sydney FC opened the scoring as Charles Lokolingoy slotted home for a 1-0 lead after being played in by Bai Antoniou.

Lokolingoy returned the favour not long after to put Antoniou through one on one with the Rangers keeper. Antoniou nudged the ball past the onrushing custodian only to be brought down outside the box by the keeper and inexplicably the referee only issued a yellow card for the foul.

William Mutch also rounded the keeper only to see his goal bound shot cleared off the line by last ditch defending and Sydney had to be content with a 1-0 margin at the break.

It didn’t take long for Sydney FC to extend the gap to two goals as Lokolingoy notched his twentieth goal of the campaign following some neat “tika taka” passing between the big striker and Nicola Kuleski after 47 minutes and Sydney seemed to be cruising.

However, on the hour mark a quick fire three goal burst by the Rangers in the 60th, 61st and 65th turned the game on it’s head as Mt Druitt now led 3-2.

A combination of a packed defensive line and long ball clearances by Mt Druitt thwarted any efforts the Sky Blues threw at their opponents and Mt Druitt were able to withstand the onslaught of pressure in the final 25 minutes to hold on for the victory.

Despite the loss Sydney FC maintain top spot on the ladder and club championship as they prepare to face the Northern Tigers at Lambert Park on Saturday, 25th June 1st grade kick 7.45pm / Under 20 5.45pm / Under 18 3.45pm. 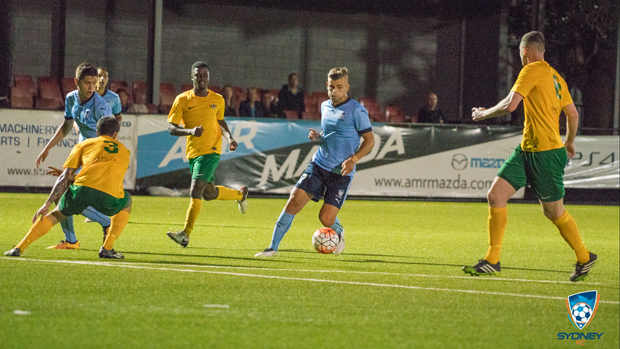