Sydney FC defeated Hyundai A-League Champions Brisbane Roar 2-0 to move to the top of the table at Suncorp Stadium tonight.

Two fantastic strikes from Austrian Marc Janko and Serbian Milos Dimitrijevic either side of the break secured the three points for the Sky Blues as Graham Arnold’s men remained unbeaten in the Hyundai A-League season.

Both goals came from distance and Sydney FC could easily have scored more in a dominant display against the reigning Champions.

Graham Arnold: “I’m delighted especially after having three games in six days.  This was a very important game and we had enough fresh legs in the team to do what we needed to do tonight.”

“Against Brisbane you can’t start slowly and we wanted intensity right from the start.  We tried to do that and could have had a goal in the first two minutes.”

“The boys put in a fantastic performance tonight, a great effort.”

“It’s only round three, we’ve got a long, long way to go and this team will only get better.  We’ve got players that are not here today that can add a lot to the team as well.  For me it’s about the team, it’s about the squad and the boys are doing well.” 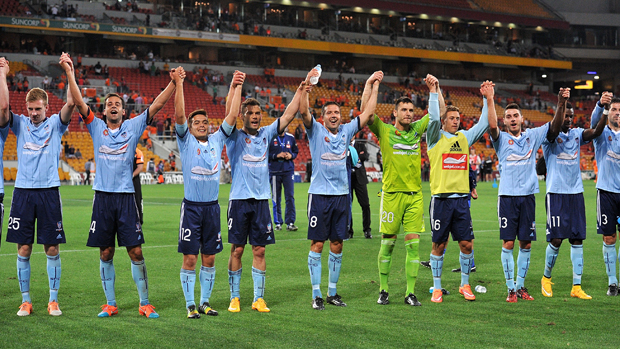 27’ JANKO GOAL – Brisbane Roar goalkeeper Jamie Young clears the ball from the left hand side of his box.  The ball falls to Marc Janko who takes a touch on his chest to control and fires a left foot volley back towards goal from 40 yards and sees the ball nestle in the corner of the net.

54’ DIMITRIJEVIC GOAL – Dimitrijevic and Brosque involved in a neat interchange of passing in the centre of the field before the Serbian looks up and hits a delightful floating shot over the keeper from 35 yards.

3’ JANKO SHOT BLOCKED – Brisbane goalkeeper Young attampts to save the ball from going out for a corner but only succeeds in pulling the ball back to Brosque inside the box.  With the keeper stranded Brosque turns the ball back to Janko who hits a first time shot at the empty net but Matt Smith gets back late to block the ball.

12’ IBINI SHOT BLOCKED – A throw in on the right hand side finds Janko and he plays a first time ball back inside to Ibini who collects and bears down on goal. From 12 yards out and at a slight angle he shoots but it’s blocked and cleared by the Roar.

36′ JANJETOVIC TIPS OVER – Petratos receives the ball just inside the area, takes a touch and shoots but Janjetovic reacts well to tip over.

93’ IBINI SHOOTS OVER – Great turn of pace from Bernie Ibini takes him past the Roar back four but he smashes a shot over.

Sky Blues Head Coach Graham Arnold was forced to change his back four with centre half Nikola Petkovic suspended after his controversial sending off against Adelaide United in the FFA Cup on Tuesday night.  Sasa Ognenovski returned to replace him following his suspension to join Seb Ryall at the heart of the defence.  Terry Antonis came back into the midfield to partner Milos Dimitrijevic while Alex Brosque, Bernie Ibini and Corey Gameiro were also recalled to the starting line up following the FFA Cup tie.  Gameiro switched places with Brosque in a different front line to the one against Western Sydney Wanderers,the young striker moving to the left with Brosque up front with Marc Janko.  The bench had a distinctly youthful look with Hagi Gligor, Christopher Naumoff, Alex Gersbach and Aaron Calver alongside veteran goalkeeper Ivan Necevski.