Sydney FC have moved to joint top of the Hyundai A-League after a 3-0 demolition of Perth Glory in Western Australia.

The Sky Blues continued their season long unbeaten away streak, stretching the club record to 12 games with a win which puts them in a key position to challenge for the Premier’s Plate with two games to go.

A first half goal from Alex Brosque gave Sydney FC the ascendancy before Bernie Ibini made it two with a spectacular strike on the hour.  Two minutes later the goalscorers combined and skipper Brosque put the game beyond doubt with a clinical finish.

The Sky Blues could have had more in truth and were unlucky with a number of shots which the busy Vukovic did well to save.

Sydney FC now sit on 44 points alongside Melbourne Victory with two games to go (Victory have three) in the battle to finish top of the ladder.

Graham Arnold: “My players were talking about it (Perth’s salary cap saga) at the pre-match meal and I had to refocus them, and pretty much tell them it’s got nothing to do with us.

“We have to be professional in what we do. I thought tonight was a very good performance from us.”

Sydney FC midfielder Milos Dimitrijevic:- “We know it’s not easy for them because of the decision for them today but we played our football. We are here to take three points, we did it, so we are very happy.”

34’ BROSQUE GOAL – Petkovic crosses from the left hand side to the far post where Janko wins a downward header which Vukovic is down quick and low to parry but Brosque is first to react and places the ball into the net from 4 yards.

59’ IBINI GOAL – Ryall’s cross from the right takes a deflection off the head of Thwaite and lands with Bernie Ibini just inside the the left edge of the box.  He takes once touch to control it with his right foot before blasting it beyond keeper with his left and into the top corner.

63’ BROSQUE GOAL – Brosque finds Ibini in space on the left of the attack.  Ibini moves into the box and pulls the ball back to Brosque again who hits it first time into the corner of the net, unmarked from 16 yards.

7′ JANKO CHANCE – Seb Ryall wins the ball on the right wing and crosses with his left foot into the six yard box. The ball evades everyone and Marc Janko is the last man at the back post.  He slides in but his outstretched foot is just an inch away from making contact and poking the ball home.

10′ NAUMOFF CHANCE – Good work from Petkovic on the left hand side to fashion an opportunity to cross, which he does and Naumoff meets it at the far post, just in front of Jamieson, but heads over.

19’ DIMITRIJEVIC HITS THE BAR – Dimitrijevic receives the ball on the right edge of the box from Ibini.  He lets the ball travel across his body and bends a right foot shot towards the top corner which bounces off the woodwork and away to safety.

25’ VUKOVIC SAVE – Dimitrijevic plays a short corner with Brosque and receives the ball back. He runs into the box from a tight angle and beats four defenders before shooting at Vukovic from close in.  The keeper saves it and there’s a scramble in which Janko’s follow up is deflected wide.

30’ JANKO VOLLEY WIDE –  Bernie Ibini crosses from the left hand side to the far post where Janko attempts an acrobatic volley with his left foot but he puts it back across goal and wide. 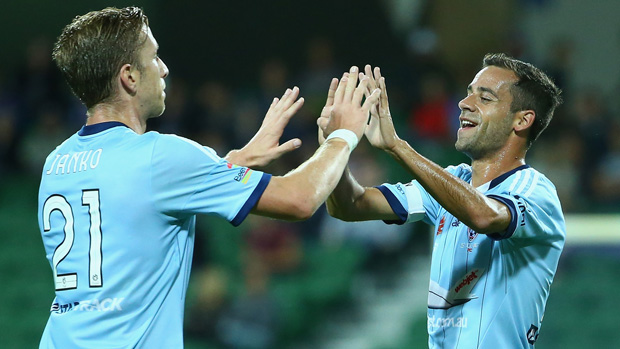 33’ BROSQUE SHOT SAVED – Ibini pushes the ball back to Brosque on the edge of the box and his first time goalbound shot is parried by Vukovic and cleared by Glory.

36’ GOAL DISALLOWED FOR PERTH – MacLaren receives the ball on the edge of the left hand side of the box in an offside position.  He turns and fires a shot into the right hand corner of Janjetovic’s goal but it’s pulled back for the infringement.

66’ GARCIA OFF THE BAR – Jamieson crosses from the left with his right foot and Garcia’s flicked header brushes the top of the bar for Glory.

72’ JANKO SHOT SAVED – Some brilliant first time passing play by Sydney FC finishes with Stambolziev finding Janko.  The striker beats his man to unleash a powerful shot which Vukovic saves with his body.

81′ IBINI SHOT PARRIED – Bernie Ibini unleashes a shot from distance which Vukovic has to parry and Seb Ryall blazes over the rebound from an offside position.

Sky Blues Head Coach Graham Arnold made one change to the starting line-up that lost to Adelaide United a week ago.  Mikael Tavares was rested with a tight groin and Rhyan Grant came into the team.  Peter Triantis returned to the bench.