Sydney FC will compete in the last 16 of the AFC Champions League for the very first time in the club’s history and are in pole position to finish top of Group H following a 0-0 draw with Urawa Red Diamonds tonight.

Sydney FC will compete in the last 16 of the AFC Champions League for the very first time in the club’s history and are in pole position to finish top of Group H following a 0-0 draw with Urawa Red Diamonds tonight.

The Sky Blues made it three clean sheets in a row in Asia as they had claims for two penalties turned down against Japan’s biggest club, and will go into the final round of group matches two points clear at the top of Group H.

Graham Arnold’s men had already qualified for the knockout stages after Pohang Steelers’ failure to beat Guangzhou Evergrande last night, and a win tonight would have secured top spot in the group.

An equal or better result than Urawa in the final group game will secure first place for the Sky Blues, who travel to China to face Guangzhou while Urawa meet Pohang at home.

They will have to do it without striker Matt Simon who received a second booking of the ACL campaign but Andrew Hoole will return following suspension. 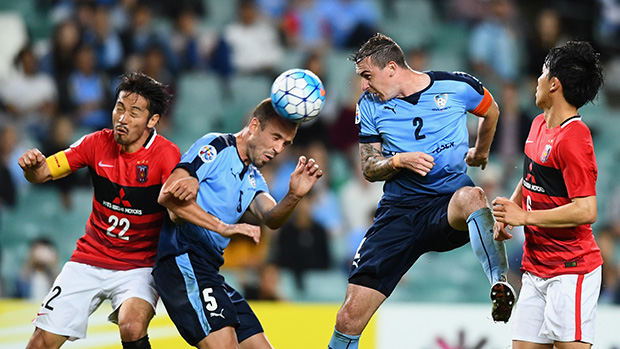 Graham Arnold: “It was tough for both teams on a field like that, it wasn’t an easy surface to play on. Overall I thought we did very well tonight, they’re a very difficult team to play against, they’re very mobile.

“I thought we did well, especially our kids tonight, we had four 20 year olds out there and I thought they did exceptionally well. I think at the end of the day you want to win the game and to get it [top spot] over and done with, but I think that’s the next best result for us.

“It was a real tactical battle tonight, a real difficult game, and I thought the boys carried out the game plan well. It’s a wonderful occasion to celebrate tonight that we’ve created history at the club and now we want to take it much further.”

7’ MUTO CHANCE – Muti breaks through the Sydney FC midfield, cuts inside and blasts a left foot shot over the bar.

9’ CARNEY SAVES GOAL – Muto cross isn’t cleared well by the Sky Blues and it falls to Zlatan, he passes to Lee to shoot but Carney deflects the ball wide with a block.

12’ BLACKWOOD CHANCE – The young striker receives the ball and drives at the Urawa defence, he beats two players coming inside and shoots but a sliding block meets his goalbound shot.

30’ DIMITRIJEVIC SHOT SAVED – An attempted through ball comes back to Dimitrijevic on the edge of the box.  He takes a touch and beats two players, darting into the box to hit a shot which is brilliantly saved by the Reds keeper.

36’ NAUMOFF SHOT WIDE – Sydney FC break and O’Neill feeds Naumoff who picks up the ball just inside the Reds half and runs at the opposition full back.  The Young Socceroo cuts inside onto his left foot and flashes a shot just wide of the upright.

50’ BLACKWOOD PENALTY CLAIM – Blackwood tripped in the box claiming a penalty but nothing given.

62’ BLACKWOOD RUN AND SHOT – Blackwood again runs at the Reds defence gets to the byline and tries to shoot from a tight angle but the keeper is by his post and blocks it.

78’ GREAT SAVE JANJETOVIC – Umesaki plays the ball into the box to Muto who backheels to Koroki to shoot low and Janjetovic pulls off a marvellous save.

86’ BLACKWOOD PENALTY CLAIMS – A ball into the box is chested down by Blackwood who appears to be pulled down from behind while he controls the ball but referee waves away penalty claims. 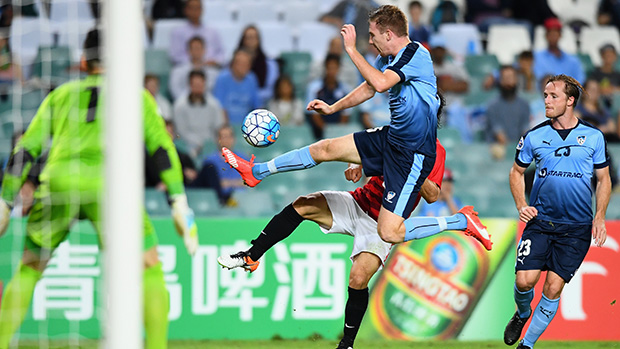 Head Coach Graham Arnold made two changes from the starting line up which faced Perth Glory ten days earlier.  Filip Holosko is unavailable for ACL selection and was replaced by Christopher Naumoff on the right hand side of the attack while Ali Abbas was replaced by Rhyan Grant at left back as he was suffering from a slight hamstring injury.  Anthony Bouzanis replaced Ivan Necevski on the bench who had a sore foot, while Shane Smeltz, Riley Woodcock and Rob Stambolziev were also recalled to the bench.