The win means the Sky Blues will face either Melbourne clubs Victory or City who face each other next Tuesday night in the second FFA Cup semi at AAMI Park.

Vukovic, who’s played more FFA Cup games than any other player after appearance in the two previous finals with Perth Glory then Melbourne Victory, conceded it wasn’t an easy game in the nation’s capital.

“It was a pretty difficult game, they made it tough; they got men behind the ball and played on the counter,” he told Fox Sports.

“A few chances went their way but we managed to keep another clean sheet [the third on the trot].

“We’re delighted with the win, and the Cup final now which is very exciting.

“I guess I’ve been lucky and played in some good sides,” he added when asked about his record of Cup final appearances. 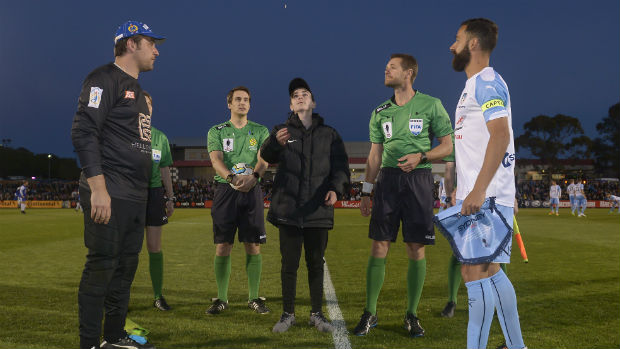 Canberra Olympic were gallant in defeat and genuinely pushed the Sky Blues at Viking Park.

“We can hold our heads up. No regrets at all,” said charismatic Canberra Olympic keeper Angelo Konstantinou.

“They just beat two A-League teams 4-0 and they only beat us 3-0 so we can hold our heads up high.

“It just came down to quality finishing in the end.

“And we had 5,500 fans here. It shows the support here in Canberra,” added the veteran.