Sydney FC will begin the defence of their Hyundai A-League Championship and Premiers Plate trophies with a Grand Final re-match away to Melbourne Victory in a glamour fixture on the first Saturday (7th October) of the season at Etihad Stadium.

The Sky Blues will also put their fantastic recent record at Allianz Stadium on the line with 14 exciting home games (one more than last season) including two huge #SydneyDerby matches against Western Sydney Wanderers.

The first #SydneyDerby will come in round three following on from the Sky Blues’ first home game of the season against Wellington Phoenix on Sunday 15th October.

In a thrilling school holidays period for the Champions, the Sky Blues will also be put to the test in two home games either side of the New Year against Perth Glory (30/12) and Newcastle Jets (3/1).

The regular season is rounded out with another massive game against 2016/17 Grand Finalists Melbourne Victory on Saturday 14th April 2018.  Keep scrolling below for Arnie’s reaction. 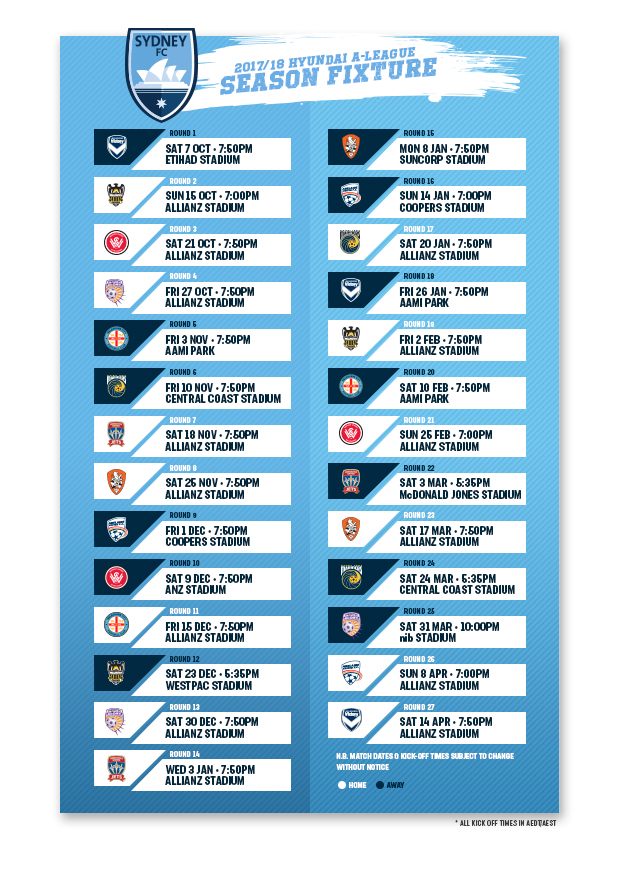 Head Coach Graham Arnold is pleased with the draw.

“We’ve got 14 home games instead of the 13 matches we had at home last season.

“We didn’t lose a game at home last season, we won ten and drew only three.  We scored 29 goals in the process and conceded just five so I’m looking forward to that continuing this season.

“There are also two big Sydney derbies for fans to look forward to at Allianz Stadium and they are always great occasions so it’s very exciting.

“From the players point of view there is only one trip to Perth and one to Wellington which means less travel for them which is a good thing.”