Sydney FC have been held by Adelaide United after dominant second half display in which the Sky Blues came within inches of taking all three points.

Matt Simon and Filip Holosko equalised first half Adelaide United goals before the Sky Blues pressured the Reds goal in the second half creating a number of chances.

The result moves Sydney FC up to fourth on the ladder ahead of next Saturday’s home match against Perth Glory. 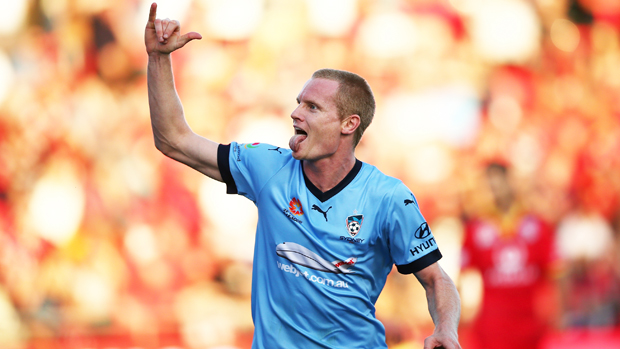 Graham Arnold: “We played very well again tonight, like we have in the last 6 months and last year.  It’s all perception [that we don’t entertain] and the perception is wrong.  We have got very good players and we play very good football.

“We controlled most of the game in the opposition’s half like we have for the first 17 games.  We didn’t have a great game against Brisbane and got caught on the break and I think today the boys showed we have a lot of quality.

“We’ve got Alex Brosque back next week and we’ll get better and better.”

2′ CIRIO GOAL – Cross from the right side from Adelaide and as Ryall tries to clear the ball it takes a lucky rebounds off Cirio and into the net.

38’ SIMON GOAL – Fantastic cross from Holosko to Matt Simon who gets between two defenders to put a diving header home.

45’ CIRIO GOAL – Kamau dribbles in the penalty area and lays the ball back to Cirio to shoot. Janjetovic gets a hand to it but it trickles over the line.

45’+2’ HOLOSKO GOAL – Ninkovic finds Holosko with a delightful chip and the Slovakian lifts the ball beyond Galekovic as the keeper came out to close down, right on the stroke of half time. 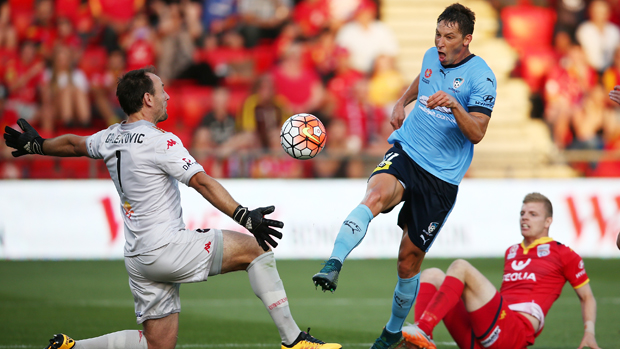 15′ NAUMOFF SHOT – Naumoff’s shot on target takes a deflection and goes wide of the mark for a corner.

19’ ISAIAS HITS BAR – Isaias his the bar from a right foot free kick.

24’ SIMON TREATMENT TO FACE – Matt Simon challenges with La Rocca at a free kick and referee stops play as the Sydney FC has to have treatment to his face following the collision.

52’ NAUMOFF CHANCE – Right back Ryall plays a fantastic ball to the back post for Naumoff the left winger volleys wide.

64′ SIMON SHOT – Matt Simon shot on the half volley over the bar.

67’ MAUK FIRES OVER – Mauk gets into a good position in the box but fires over.

75′ RYALL EFFORT CLOSE – Great move from Sydney FC and Ryall cross is cut out for a corner as Simon waited to pounce.

77′ WHAT A SHOT!! – Dimitrijevic blasts one from range and Galekovic tips over acrobatically.

85′ SO CLOSE SYDNEY FC – One touch build up from Carney, Holosko and Ninkovic and no one can quite get on the end.

Head Coach Graham Arnold made four changes to the starting line up from the team who faced Brisbane Roar.  Alex Gersbach, who left to join Rosenborg was replaced by Seb Ryall with Rhyan Grant moving to left back, while Brandon O’Neill moved to the bench with Milos Dimitrijevic coming into the team. Matt Simon and Christopher Naumoff came into the line-up with Andrew Hoole and George Blackwood missing out.