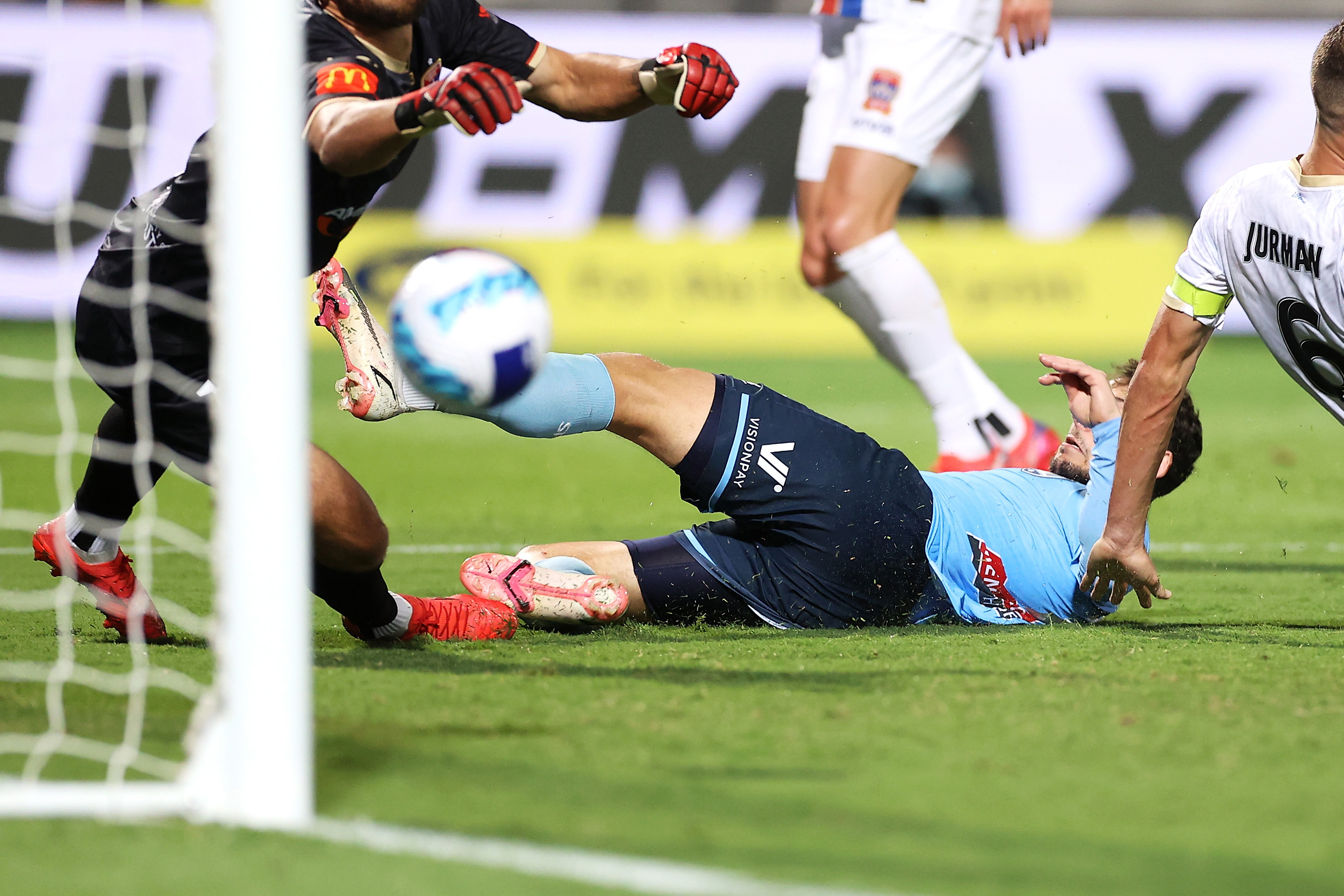 Sydney FC have been pegged back by two second half Newcastle Jets goals and a VAR offside decision to only take a point at Netstrata Jubilee Stadium this evening.

LE FONDRE GOAL – 8’ – Le Fondre is played through by a brilliant ball from Retre and is brought down by the keeper. The Englishman picks himself up and sends the keeper the wrong way from the spot.

BOUMAL SHOT – 27’ – Boumal volleys from a long way out and the ball goes just over the bar.

KAMSOBA GOAL – 30’ – Another fantastic through ball from Retre sets Le Fondre away.  The striker spins and drills the ball across goal and finds Kamsoba who volleys the ball home.

NINKOVIC CHANCE – 46’ – Kamsoba gets to the byline and crosses to Ninkovic who controls and shoots but Duncan is out quick to save.

NINKOVIC SHOT JUST OVER – 55’ – Ninkovic drives forward and shoots just over the bar.

YUEL GOAL – 59’ – Penha plays a ball through to Yuel who beats Redmayne from just inside the box.

YUEL GOAL – 65’ – Yuel drives into the box and launches a shot into the roof of the net.

LE FONDRE GOAL DISALLOWED – 75’ – Retre makes a fantastic tackle in the heart of the midfield and drives forward. He shoots and the ball falls wide to Wood off a Jets defender, who crosses for Le Fondre to finish.  However, the goal is ruled out for offside.

WOOD CHANCE – 85’ – Wood is played clear by Kamsoba but Duncan stands up to his finish.

What They Said: Steve Corica: “It was an entertaining game for the fans.  I thought we played really well.

“We scored early goals in the first half and dominated it.  They came back in second half and the first goal gave them momentum.

“It’s pretty frustrating with the third goal, it looks like it came off one of their players so he can’t be offside and he wasn’t offside anyway.

“It’s disappointing, and I thought in my opinion, the referee made a few bad decisions.

“The second goal for them, the ball was ten metres in front of where it was meant to be taken from and it was rolling, and then he pulls up one of ours.

“It’s disappointing because we should have won that game.”

Sydney FC have been denied all three points by two second half goals to Jets forward Kuach Yuel and a VAR decision which overturned an Adam Le Fondre goal.

The Sky Blues went into a first half 2-0 lead thanks to a Le Fondre penalty and Elvis Kamsoba’s first goal for the club.

However the Newcastle Jets struck back after the break when Yuel finished from the edge of the box and then hit a superb individual strike within six minutes.