Sydney FC inflicted another Sydney Derby defeat on the Western Sydney Wanderers, this time in the Westfield W-League.

Two first half goals from Leena Khamis did the damage and it could have been more if it wasn’t for a series of fantastic saves from Wanderers keeper Jada Mathyssen-Whyman.

The win is the Sky Blues women’s first of the season ahead of a trip to Melbourne Victory next weekend.

Dan Barrett: “It was great to get the three points. I was very happy with the way we played but we need to be more ruthless in front of goal and that’s something that we’ll be working on in training this week.”

13’ KHAMIS GOAL – Tobin plays in Leena Khamis in the area and she beats Cooper before firing low into the net.

29’ KHAMIS GOAL – Tobin’s right wing cross is cleared and when Kyah Simon shoots from the edge of the box Khamis directs it towards goal while sitting on the ground.

57’ SIEMSEN CHANCE – A Khamis cross from the right is missed by the Wanderers defender and falls at Siemsen’s feet but she can’t get enough contact on the ball.

64’ YEOMAN-DALE CHANCE – Yeoman-Dale storms down the right flank and the space opens up in front of her towards goal to allow her to produce a shot however Whyman makes an excellent save.

65’ KENNEDY GOAL DISALLOWED – Kennedy heads home a Polias right wing corner but she is adjudged to have interfered with the goalkeeper.

77’ KHAMIS CHANCE – Khamis chest controls a lofted pass from Ralston and beats two defenders to curl a right foot shot into the far corner but Whyman produces a fabulous finger tip save. 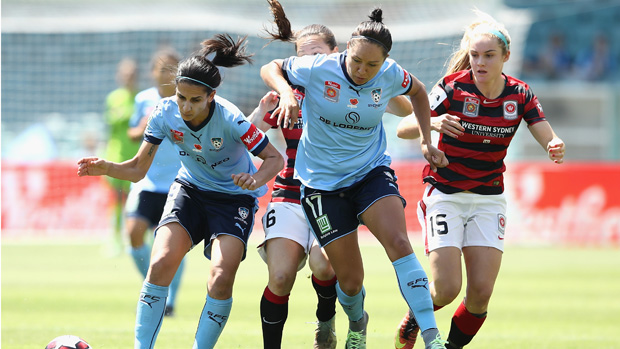 Caitlin Foord missed out following her red card a week earlier while Servet Uzunlar was ruled out late-on after sustaining an injury in the warm-up.