Sydney FC moved back to joint top of the Hyundai A-League with a confident display and performance against Newcastle Jets.

Sydney FC moved back to joint top of the Hyundai A-League with a confident display and performance against Newcastle Jets.

The Sky Blues solitary goal came from an excellent second half move from skipper Alex Brosque however they could have had a hatful more.

It was a win which Graham Arnold described as the best Sydney FC performance since he had been at the club.

The Sky Blues are level on point with Melbourne Victory and Western Sydney Wanderers who play this weekend. 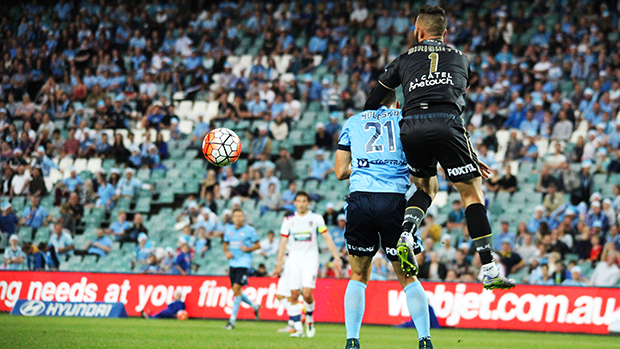 Graham Arnold: “We got rewarded for good play and the bad luck we’ve had over the last few weeks. Tonight the first half was probably the best Sydney FC performance since I’ve been at the club. The most important thing is that Holosko keeps getting in goalscoring positions and it will come, his record stands for itself.

“I thought Holosko was excellent all night, second half he was very good. Anyone else could have probably thrown the towel in, at the end of the day for me he played excellent. The team discipline and team structure was very good and that pleased me the most. Tonight the players did what they were told to do and they performed the way they should.”

56’ BROSQUE GOAL – Jets give the ball away to Dimitrijevic who quickly plays the ball into Ninkovic who in turn gives it to Brosque. With only one man to beat Brosque shows him a clean pair of heels and drills the ball into the bottom corner with a left foot strike. 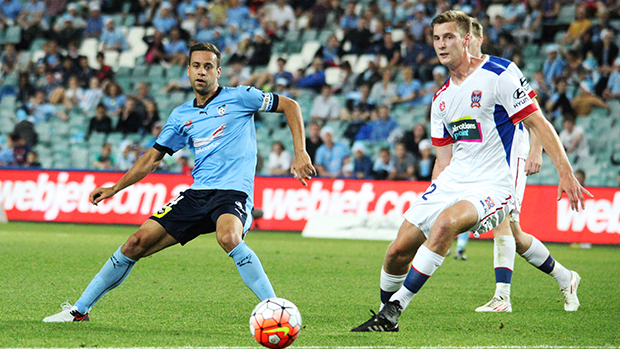 16’ HOLOSKO HITS POST – Jurman finds Brosque with a long pass.  He turns the ball inside to Hoole who drives at the Jets defence and plays a superb ball across the back four to the far post where Holosko hits it first time but the ball rebounds off the post and to safety.

25’ NINKOVIC CHANCE – Gersbach finds Hoole on the left and the former Jets player clips the ball into the near post where Ninkovic is waiting to try a deft flick, however the pace isn’t strong enough to beat Birighitti.

29’ HOLOSKO CHANCE – Ninkovic takes a ball from Gersbach inside the area in a tight area.  He turns and delivers a pass to Holosko who is in front of goal but the Slovak can’t quite get his foot around the ball to curl it into the far corner.

34’ HOLOSKO HEADED CHANCE – Brosque releases Grant down the right hand side and his perfect cross reaches Holosko six yards out who directs a header straight into the arms of Birighitti.

45’ GREAT SAVE BIRIGHITTI – A long ball is played to Brosque who flicks a header on to Holosko. The Slovak bears down on goal and smashes the ball at goal but Birighitti is down quickly to trap the ball under his body.

47’ ALIVODIC MISS – Jets break down the right hand side and cut the ball back to Alivodic who blasts over from 12 yards.

82’ CROWLEY MISS – A Jets cross isn’t cleared and falls to Crowley who miskicks when faced with goal and Janjetovic gathers.

Sydney FC Head Coach Graham Arnold made on change to his starting line-up with Andrew Hoole coming into the left hand side of midfield and striker Shane Smeltz making way.  As a result Alex Brosque was pushed up front from the number 10 role with Ninkovic sitting in behind.  Smeltz joined a forward heavy bench alongside Matt Simon, George Blackwood, Jacques Faty and Ivan Necevski.