A record breaking display from Marc Janko helped lift Sydney FC into second place on the Hyundai A-League ladder with a nine goal thriller capitvating the 13,818 in attendance at Allianz Stadium.

Sydney FC have moved into second place in the Hyundai A-League table after a rollercoaster of a match ended 5-4 to the Sky Blues. 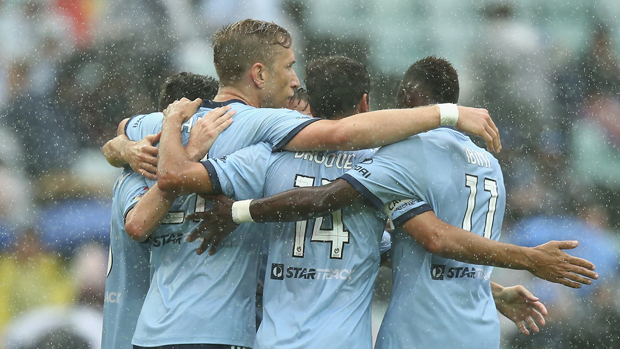 The Austrian moved onto 16 goals for this season scoring with two penalties either side of a well worked second goal thanks to good work from Christopher Naumoff.

The Sky Blues had to come from behind with a super strike from defender Matt Jurman cancelling out Henrique’s opener within the first six minutes.

Janko got the next three before Kaluderovic and Lustica brought it back to 4-3.  Brosque swept home a fifth for the home side with two minutes to go, but Petratos made it an edgy finish for Sydney FC with a 90th minute goal to make the final scoreline 5-4.

Graham Arnold:  “I must have a strong heart, it’s been tested of late but we’re playing really good football. Defensively we talked about tightening things up, but look it comes down to concentration. You’re up 4-1, go for 5-1. That’s what a top team does and that’s stuff that we have to work one and stuff we need to move forward on.

“Our attacking play and the way we’re moving the ball is outstanding but I think tonight was as good a game in possession as probably any the supporters have seen Sydney FC play in the last 10 years.

“He [Marc] has bought into everything that we’re doing here and he’s in great shape, it’s not just about Marc with the goals that he’s scoring. Okay two penalties, but the build up and goal he scored in general play was great build up by us. We keep on improving, we keep on working and Marc values the team importance more than the individual performance.

4’ HENRIQUE GOAL – Solorzano slides the ball in behind the Sydney FC defence to set Henrique clear and the striker makes no mistake slotting it past Janjetovic.

6’ JURMAN GOAL – Petkovic plays a long ball forward which Janko nods back to Jurman who rifles it first time in to the top corner of the Brisbane net. 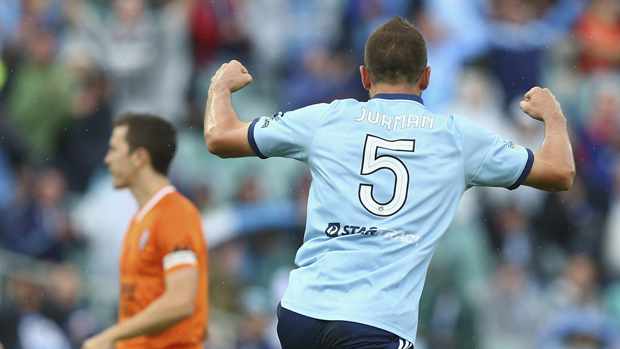 37’ JANKO GOAL PENALTY – Austrian striker Marc Janko breaks the Hyundai A-League record for scoring in seven consecutive games as he converts from the spot after Brosque is felled by Sarota.

51’ JANKO GOAL – Ibini lays the ball out wide to Naumoff on the right and the winger plays a delightful ball across the goal to Janko at the far post to side foot home from three yards.

75’ JANKO GOAL PENALTY – The Austrian is pushed over in the box by Corey Brown and a penalty is awarded. He steps up himself to bury it right footed.

78’ KALUDEROVIC GOAL PENALTY – Petkovic is adjudged to have fouled Donachie in the box after the two players came together and Kaluderovic slots the spot kick.

84’ LUSTICA GOAL – Borello gets to the byline and crosses to Lustica who powers home from the edge of the box.

89’ BROSQUE GOAL – Antonis jinks past two markers before laying the ball off to Ryall, he takes one touch & squares for Brosque to sweep in.

90′ PETRATOS GOAL – Dimi Petratos slots home after good work on the right hand side of attack by the Brisbane Roar.

22’ SOLORZANO PUTS OVER – Brown wins the ball on the left and drives forward to cross into the six yard area where Solorzano connects with an outstretched boot but can only lift the ball over the bar.

34’ YOUNG SAVES FROM JANKO – Tavares plays Gersbach into space on the left and the full back comes inside before playing a reverse pass to Janko behind the Roar defence.  The big Austrian striker hits it first time but Young deflects it wide with his leg.

49’ BROSQUE CHANCE – A neat one-two with Brosque and Naumoff sees the skipper break through the heart of the Roar defence but keeper Young smothers his powerful shot.

50’ JURMAN CLEARS OFF THE LINE – Kaluderovic gets in behind the full back Gersbach but Janjetovic blocks his shot which loops up high and Jurman clears the ball from the edge of the goal line.

Sydney FC Head Coach Graham Arnold made two changes to the team which lined up against Newcastle Jets at Hunter Stadium nine days earlier.  Mickael Tavares and Alex Gersbach both returned from suspension at the expense of Rhyan Grant and Terry Antonis who both moved to the bench as the Sky Blues fielded the exact same line up which won the Sydney Derby 4-3 two weeks earlier.

Sydney FC’s next home game is against Melbourne City on Friday 20th March at Allianz Stadium (kick off 7.40pm).  Purchase tickets today or become a Member and ensure you don’t miss a moment of Hyundai A-League action by heading to www.ticketek.com.au/sydneyfc