Sydney FC Westfield W-League team got their pre-season off to a winning start as they defeated the Illawarra Stingrays 3-1 thanks to goals from Westfield Matilda’s Amy Harrison, Leena Khamis and Alanna Kennedy.

The Stingrays took a shock early with striker Jordan Baker capitalising on an error in the Sky Blues defence to poke the ball past keeper Khamis.

Sydney FC were soon level however through a stunning strike from Harrison who could have had a hat-trick, before Khamis and Kennedy put the game beyond doubt in the second half.

Dan Barrett – “They understood the things that we’ve been working on but timing was out at time and that simply just comes from playing more games but the signs were there, we were ok.

“Amy probably could have had a hat-trick within the first ten minutes, her runs were absolutely perfect so good positive signs going forward with the ball, I think we need to do a little bit more work when we don’t have the ball but a good first hit out.”

14’ BAKER GOAL – Sydney FC give away possession in the back line and Baker capitalises to nudge the ball past Rollason and shoot low into the bottom right hand corner.  Khamis got finger tips to the ball but it crept in via the post.

28’ HARRISON GOAL – Harrison cuts inside from the left hand side and plays a one two with Leena Khamis before rifling a right footed shot in off the underside of the bar to equalise. 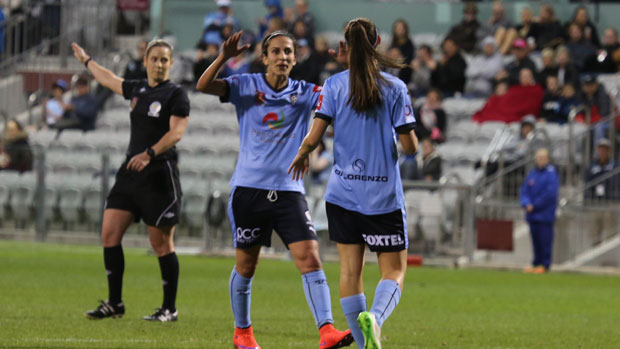 58’ KHAMIS GOAL – Cooper fails to clear a bouncing ball and lets is slip underneath her on the edge of the box. Khamis is first to pounce and drills it low beyond the keeper into the bottom right hand corner from 16 yards.

69’ KENNEDY GOAL – In-swinging corner from Camilleri is met with the head of Kennedy just under the cross bar who makes no mistake.

5’ HARRISON CHANCE – A cross from new signing Sunny Franco from the right found Harrison unmarked at the far post but the forward miscued her strike and the ball rolled into the arms of Finaldson.

8’ BOLGER SHOT SAVED – Good work from Ralston who cut inside from the left full back position to poke the ball through to Bolger who managed to ride two challenges into the box to shoot and force the keeper into a low save.

23’ HARRISON CHANCE – A lofted ball from the back by Rollason falls into the path of Harrison who meets it with her toe but her poke isn’t strong enough to beat the keeper.

38’ HARRISON SHOT BRILLIANTLY SAVED – Harrison jinks through the Stingrays defence and creates space on her right foot to curl the ball into the lower right corner but the keeper makes a tremendous diving stop.

45’ BAKER SHOOTS OVER – Middleton wins the ball and bears down on goal but Kennedy makes a super last ditch tackle and as the Stingrays appeal for a penalty Baker attempts a long range lob which goes just over.

53’ CAMILLERI SHOT SAVED – Ibini makes a great run down the right hand side and crosses to find Camilleri whose shot takes a deflection and loops up forcing Finaldson to parry the ball back into play from under the cross bar and then save Simon’s follow up again.

Sydney FC Head Coach Daniel Barrett began his first match of the new pre-season missing captain Teresa Polias and Olivia Price through injury. Assistant Coach Renee Rollason donned the armband in Polias’ absence while it was a familiar starting eleven with only new faces Sunny Franco, Sham Khamis in goals, Alanna Kennedy in the backline and Princess Ibini on the bench missing from the 2014 squad. Train on players Georgia Plessas, Heidi Makrillos and Lydsay Ghole made up the substitutes.

Sydney FC W-League Memberships are now on sale for the Westfield W-League 2015/16 season.   Click HERE to become part of the Sky Blues family