Sydney FC extended their unbeaten season to 16 games and move eight points clear on top of the Hyundai A-League table with a deserved 2-0 victory over defending champions, Adelaide United on Friday night.

Sydney FC extended their unbeaten season to 16 games and move eight points clear on top of the Hyundai A-League table with a deserved 2-0 victory over defending champions, Adelaide United on Friday night.

The Sky Blues secured the win during a lively period in the second half with two goals in the space of two minutes.

After Brosque’s superb first-time volley broke the deadlock, Ninkovic quickly doubled his side’s lead with a calm finish just past the hour mark.

Sydney’s showing displayed a creativity and ruthlessness in the final third that satisfied the home crowd’s expectations as Australia Day’s clash against Melbourne Victory approaches.

The result means Graham Arnold has now passed Vitezslav Lavicka for the most wins all time by a Sydney FC Head Coach. 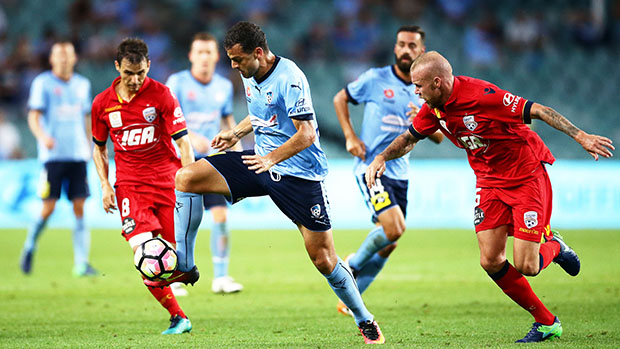 Graham Arnold: “I thought that the whole 90 minutes was very dominant. I think the difference between the second half and the first was the last pass and finishing the opportunities off. I thought it was a much improved performance with the ball. We haven’t looked at the stats but I don’t think Vukovic had to make a save tonight.

“The boys did fantastic tonight and it’s an improvement on the last two weeks and we’ll get better and better.

“Rhyan’s suspended now but we’ve got depth, we’ve got Calver who can play there, we’ve got Jordy that’s ready to play and Josh Brillante played half a dozen national team games at right fullback so it doesn’t bother me, it’s about winning every week.

“Calver is doing exceptionally well, he’s a mature kid for his age. Him and Wilkinson have combined very well, it looks like they’ve been playing together for years, I thought he was excellent again tonight.”

58’ BROSQUE GOAL – A devilish ball in from Grant is met first time by Brosque who guides his volley into the back of the net with exquisite technique.

60’ NINKOVIC GOAL – After a flurry of shots inside Adelaide’s six-yard box, Ninkovic finds enough space to place the ball into the back of the net. 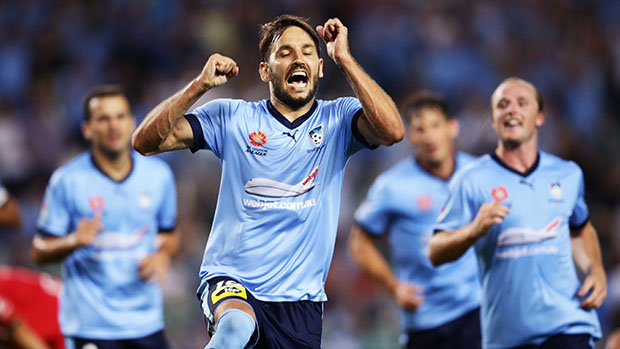 2‘ ZULLO CHANCE – Ninkovic cushions Grant’s cross inside the box and slides the ball in behind for Zullo who sees his cross deflected into the side netting.

6‘ GRANT CHANCE – Ninkovic finds Grant inside the box with a delightful chip, however the ensuing cross fails to find a Sydney FC player.

15’ BROSQUE CHANCE – A Sydney counter-attack sees Zullo play Brosque inside the box, but the pass has too much weight on it and the ball rolls safely into the hands of Galekovic.

26’ DISALLOWED GOAL – As Ninkovic slides Holosko in on goal, the linesman raises his flag for offside as the Slovakian buries the ball into the back of the net.

37’ BROSQUE CHANCE – Brosque tries his luck from the edge of the box but his shot sails over the bar.

45’ SYDNEY CHANCE – Following Bobô’s flick-on from the corner, McGowan needs Galekovic to make an important save after his misdirected header sent the ball looping toward his own goal.

47’ BROSQUE CHANCE – A neat one-two between Bobô and Brosque sees the latter fire a shot on goal that stings the palms of Galekovic.

71’ BRILLANTE CHANCE – Brillante blazes the ball high and over the bar after Bobô did well to find him on the edge of the box.

90’ SIMON CHANCE – Carney plays Simon inside the box, but the ensuing cutback is cleared out for a corner.

Head Coach Graham Arnold made just one change to the side that drew with the Western Sydney Wanderers last weekend. Having served his one-match suspension, Joshua Brillante returned to the starting line-up in place of Milos Dimitrijevic.