Sydney FC has established the first regional New South Wales partnership in the club’s history, with the Sky Blues linking up with Football Wagga Wagga (FWW) in an on-going community relationship.

The deal will see the state’s largest inland city host one of the Sky Blues’ ever popular School Holiday Clinics, which saw over 600 participants in July 2016, as well as receive a range of benefits at Sydney FC home Hyundai A-League games, including having the association’s members become ball boys and girls and players mascot.

Sydney FC’s logo will be displayed proudly on all Wagga City Wanderers’ participant’s uniforms while two to three players each year will be invited to train and trial with the Sky Blues Academy teams. 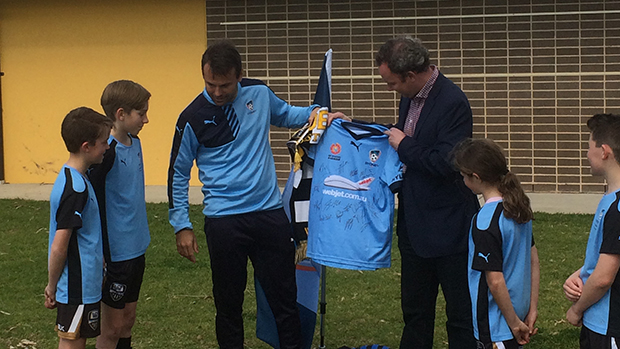 Sydney FC Chief Executive Officer Tony Pignata said he was delighted for Sydney FC to have a presence in such a hub for southern regional New South Wales.

“The community is the backbone of any great club, and I’m pleased that our great club is forming a relationship with the football community of Wagga Wagga,” Pignata said.

“It is our intention is to build Australia’s best football Academy and we want to recruit the best young players from Sydney and New South Wales. This partnership will help us do that.

“I look forward to working with Football Wagga Wagga and I can’t wait to welcome them into our Sydney FC family and to Allianz Stadium in the near future.”

The deal will see unprecedented opportunities for Wagga’s football community to get involved in football at the highest level.

“It provides a clear pathway for our players to elite football, and gives them the opportunity to realise the dream of playing football at the highest level.

“We are extremely excited in the opportunities that Sydney FC are providing our community. It will boost the sport in our region even further and it demonstrates that distance is no barrier to achieving success in football.”

The partnership begins immediately with the first Sydney FC Holiday Clinic set to take place in Wagga Wagga in October.