Sydney FC Ease To Round Of 16

Sydney FC have advanced to the next round of the FFA Cup with a 3-0 win over Wollongong Wolves.

Sydney FC have advanced to the next round of the FFA Cup with a 3-0 win over Wollongong Wolves.

Two goals in four minutes to Matt Simon in the second half gave the Sky Blues the advantage before David Carney sealed the victory with a stoppage time goal.

Debutant Danny Vukovic was rarely troubled at the other end but was called into action in the dying seconds as the Wolves looked for a consolation.  However the shot-stopper kept the hosts at bay to start his Sydney FC career with a clean sheet.

The Sky Blues have been drawn against Perth Glory away in the last 16. 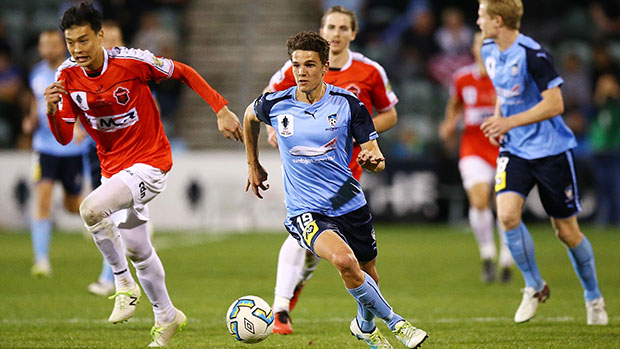 Graham Arnold: “It was great, it was a good hit out for our real first game and a very pleasing performance overall.

“Michael Zullo was excellent and showed the quality that he’ll bring to the team at left back.

“The most important thing is the win.

“We’ve got a lot of competition for places, and it’s not bad when you can bring Alex Wilkinson on and move Jurman to left back.

“We had five or six out but we’ve got a strong squad and we’ve got depth.

“I make no secret of the fact Matt Simon is a wonderful team player, he’ll do whatever you ask him to do.

“His record in the A-League is he’s scored a goal every three games, I thought he was excellent tonight.”

67’ SIMON GOAL – A cross from the left wing by Michael Zullo is met at the front post by Simon who puts it past the keeper with a towering header.

71’ SIMON GOAL – George Blackwood pushes forward through the middle of the park and puts Simon through on goal who places it smartly into the bottom corner.

90+1’ CARNEY GOAL – A well worked passing move down the right wing finishes with Bai Antoniou beating two defenders and crossing the ball to an unmarked Carney, who controls and finishes into the bottom left corner. 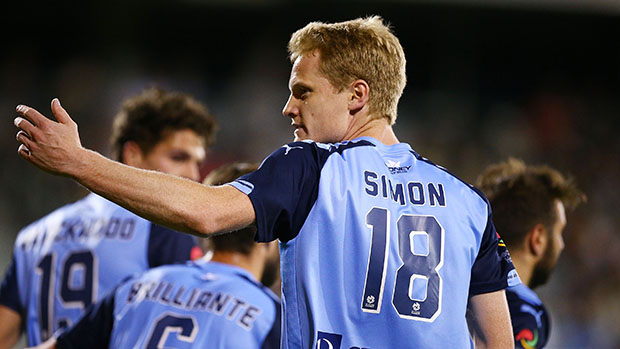 6’ CHANCE – Matt Simon knocks a long throw down to Milos Ninkovic who puts Carney through down the left channel. He slides the ball across the face of goal but no Sydney players are there to finish.

13’ CHANCE – Milos Ninkovic pushes forward and releases Blackwood through the middle but his touch is too heavy and the keeper collects it.

16’ DISALLOWED GOAL – George Blackwood powers past two defenders and slides the ball past the keeper from an acute angle on the right wing but it’s pulled back as the assistant referee deemed the entire ball had already crossed the by-line for a goal kick.

38’ PENALTY MISS – Some scrappy play in the box leads to Carney receiving the ball on the left wing before being tripped over by the Wolves defender.  Milos Ninkovic steps up to take but it’s well saved by the keeper diving to his right.

86’ MACDONALD CHANCE – Wollongong free kick from near halfway is taken short to Joshua Macdonald who drives the ball towards goal but it strikes the base of the post.

87’ VUKOVIC SAVE – A scramble in the box leads to a deflected shot from Wollongong which forces an athletic save from Vukovic on his own goal-line.

New signing Michael Zullo makes his debut for the club and Graham Arnold hands Danny Vukovic his first start as a Sky Blue. Sydney also welcome back Milos Ninkovic who’s playing his first game of the season. Sky Blues Academy players Nicola Kuleski, Bai Antoniou and Charles Lokolingoy are given the chance to impress off the bench.