A spirited second half wasn’t enough for the Sky Blues as a late Henrique goal saw Brisbane Roar take the three points at Suncorp Stadium on Saturday night.

A spirited second half wasn’t enough for the Sky Blues as a late Henrique goal saw Brisbane Roar take the three points at Suncorp Stadium on Saturday night.

The first half opened slowly before Filip Holosko put the Sky Blues ahead, however quick fire goals from Petratos and Maclaren saw the home side take a lead in at the break.

Sydney FC put in a strong showing in the second half and their lion’s share of possession paid off when Filip Holosko scored his second to restore parity three minutes from time, however a quick Roar break from the kick off ended with Henrique tapping home the winner with two minutes remaining.

The Sky Blues now round out the season with back to back home matches against Adelaide United and Perth Glory at Allianz Stadium. 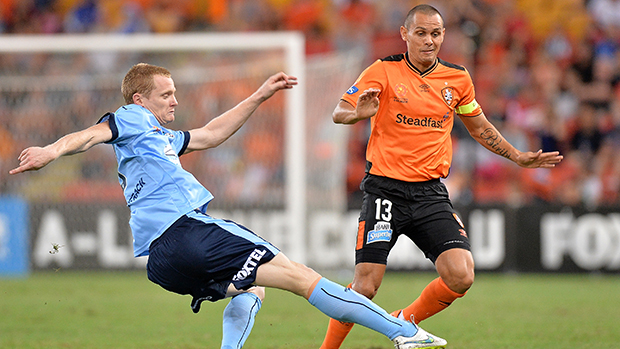 Graham Arnold: “It’s the story of our season, we had enough chances to win two games, but I thought we played well. I feel I’m learning more as a coach when we’re going through a difficult period but at the end of the day we’ve gone 10 games now [without a win], with three or four draws in that in. At the end of the day we’ve had 10 draws during the season and we should have won seven of them and that’s what’s damaged the season. We’ve still got a lot to play for with the Asian Champions League and we won’t give up in the A-League, but overall it was disappointing tonight because I feel we should have won the game.” 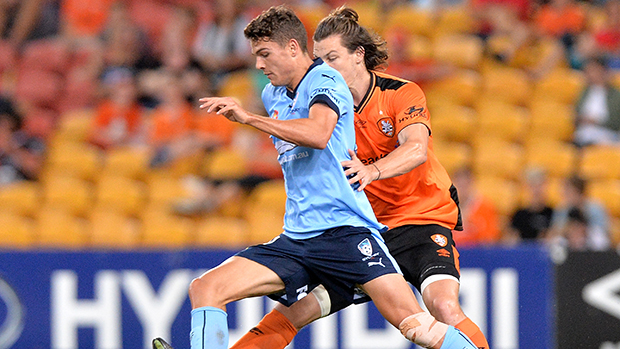 24’ HOLOSKO GOAL – Filip Holosko plays a neat one-two with Matt Simon on the edge of the area before bursting into the box to fire the ball past Young from close range.

32’ PETRATOS GOAL – Brandon Borrello brings down Zac Anderson’s block off his cross before playing a square pass to Petratos who fires in first time from just inside the area.

36’ MACLAREN GOAL – Dimitri Petratos picks up a loose ball on the right before curling towards the back post where Jamie Maclaren is on hand to tap in.

87’ HOLOSKO GOAL – Filip Holosko pounces on a loose ball to break into the area before firing low past Young to restore parity on the score line.

88’ HENRIQUE GOAL – Brisbane break off the kick off, embarking into the Sky Blues area, before Oar plays a square ball to Henrique who taps into an empty net.

4’ BOWLES HITS THE POST – Daniel Bowles charges onto a loose ball before smashing a powerful drive out off the post from 30 yards.

18’ HOLOSKO SHOT – Filip Holosko is played into the Roar penalty area on the right side but his fierce shot from an acute angle rises over the bar.

35’ JURMAN CLEARANCE – Jamie Maclaren breaks down the left flank and plays a square ball into the area however Matt Jurman provides a timely intervention to hook the ball clear.

44’ CARNEY SHOT – Flip Holosko breaks before playing Carney in to the box, and the Sky Blues winger forces Young into a sharp save at his near post with a low effort.

45+1’ YOUNG SAVE – George Blackwood produces a neat volley off a Matt Simon cross forcing Young into an acrobatic save to deny the Sky Blues youngster.

53’ ABBAS HITS THE POST – Sydney FC win a free kick centrally on the edge of the Roar area and Abbas smashes the woodwork with a curling effort off the set piece.

58’ CARNEY HEADER – Matt Simon picks out David Carney free at the near post but the former Socceroo can’t steer his headed effort in.

76’ ROAR HIT THE BAR – A Roar cross isn’t dealt with and the Sky Blues attempted clearance smashes the bar before being cleared. 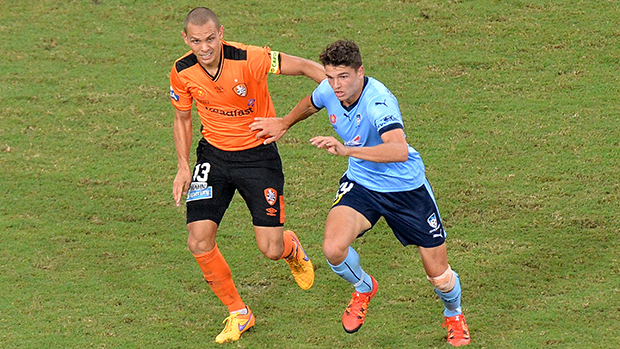 Sydney FC Head Coach Graham Arnold made two changes to the starting eleven that lined up against the Central Coast Mariners last Saturday. Matt Simon came in for Shane Smeltz to lead the line while Jacques Faty dropped out of the squad through illness, with Matt Jurman returning from injury to take his place in the heart of defence. Milos Ninkovic returned to the bench after recovering from an ankle injury picked up against the Wellington Phoenix while Andrew Hoole replaced Robert Stambolziev in the only other change to the substitutes.