Sydney FC produced a dominant display in the third instalment of the Sydney Derby this season however Western Sydney Wanderers held on to secure a draw and avoid a series whitewash.

Sydney FC produced a dominant display in the third instalment of the Sydney Derby this season however Western Sydney Wanderers held on to secure a draw and avoid a series whitewash.

The Sky Blues created numerous chances to win the game, but a combination of near misses and Liam Reddy saves in the Wanderers goal denied the home side in front of 40,382 fans at Allianz Stadium.

The visitors opened the scoring in the 12th minutes through Dario Vidosic however the Sky Blues levelled proceedings thanks to an Alex Brosque flick nine minutes before half time.

Graham Arnold: “The performance tonight was outstanding. We had enough chances to win two games, we didn’t finish them off, but overall it was a real good performance from a team that fought very hard. Matty Simon was outstanding today, I thought the boys did very well. I’ve said to the players that that [the performance] is the minimum every week, I don’t want anything less.”

12’ VIDOSIC GOAL – Long ball forward it picked up by Bridge who crosses with his right foot to an unmarked Vidosic who heads home.

36’ BROSQUE GOAL – A Holosko cross evades everyone in the centre and falls to Rhyan Grant on the left edge of the penalty box.  He drives the ball back into the box where Brosque backheels towards goal and it takes a deflection off Jamieson and rolls past Reddy. 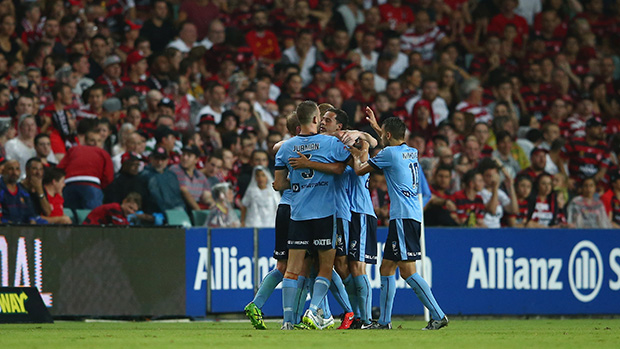 6’ O’NEILL SHOT WIDE – Brandon O’Neill unleashes a drive from the edge of the box which Reddy scrambles across goal to stop but the shot is just wide.

13’ HOLOSKO CHANCE – Holosko is released by Simon into the area but he’s hassled off the ball and it’s saved.

20’ CARNEY ONE ON ONE – Carney is released by Brosque one on one with Reddy but the winger’s left footed shot is saved down low by Reddy.

26’ SIMON OFF THE CROSSBAR – Matt Simon receives the ball on the left and cuts inside crashing a curling right foot shot off the crossbar.

28’ JANJETOVIC GREAT SAVE – A pass across the edge of the box by Castelen falls to Vidosic to hits first time curling right foot shot which Janjetovic dives to his right to save.

39’ HOLOSKO HEADER SAVED – Carney curls in a wicked left foote cross to Holosko who heads goalwards but Reddy is down to save.

50’ SIMON CHANCE – Ryall plays in Brosque in the right channel who cuts the ball back to Simon inside the box and the striker hits a first time shot inches over the bar.

58’ SIMON HEADER WIDE – Grant plays a fantastic cross from the left wing to the back post where Matt Simon is waiting but the forward’s downward header goes wide of the post with a hint of a deflection off Reddy.

60’ SIMON CHANCE – The striker receives the ball on the edge of the box, moves inside and tries to curl a shot into the far corner which Reddy saves and gathers at the second attempt.

65’ JURMAN SHOT BLOCKED – A Matt Jurman shot on target from a cleared corner is blocked and then Faty puts a header from a cross wide.

70’ GREAT SAVE JANJETOVIC – A scramble in the box results in Vidosic heading towards goal and Janjetovic diving backwards to tip over.

90+3’ HOOLE SHOT JUST WIDE – A break from the Sky Blues leaves a four on two situation and the ball eventually falls to Hoole who cuts inside and curls the ball just past the post. 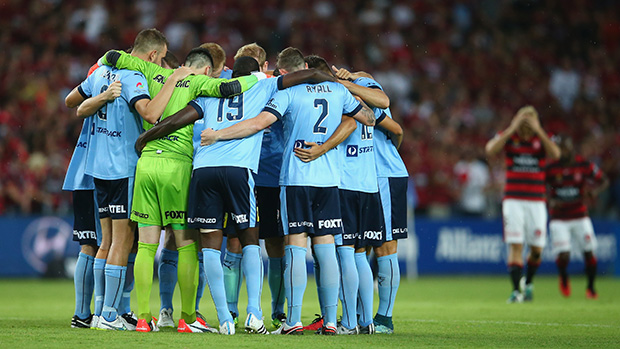 Head Coach Graham Arnold made a number of changes from the team defeated by Perth a week earlier.  Filip Holosko returned from a hamstring strain while Matt Simon came back in from suspension to partner Alex Brosque up front.  Brandon O’Neill was introduced into midfield alongside Milos Ninkovic.  Milos Dimitrijevic moved to the bench with the recalled duo of Andrew Hoole and Aaron Calver.