Sydney FC had to settle for a point despite a dominant performance over Melbourne City in a 1-all draw.

City took the lead in the first half through Wade Dekker after a defensive error by the Sky Blues, but that was the only shot the money men of City had on goal.

International marquee Filip Holosko opened his account for the club on the stroke of half time after being set up by skipper Alex Brosque following a sublime pass from fellow debutant Brandon O’Neill.

Sydney FC created a number of excellent chances in the second half but were denied time and time again by Danish keeper Sorensen, including one excellent late save from youngster George Blackwood in the final minute. 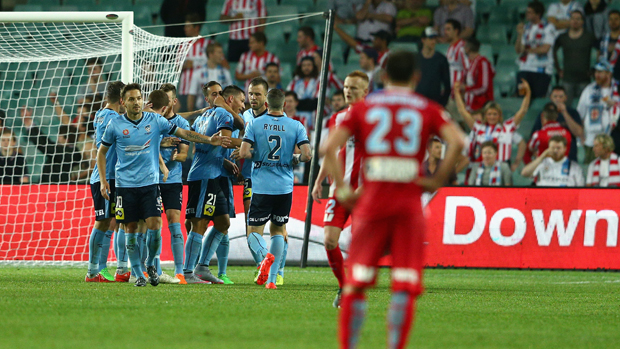 Graham Arnold: “If I compare the start this year to the start last year it’s 75% better.  I think there’s about 70% improvement in us.  As the game went on we got better and better, there was some real promising stuff.

The stats show we had seven shots to their one and that was their goal which was our mistake and we pretty much dominated the game. The only time they were dangerous was when we turned over cheap possession in the middle of the park and they hit us on the break.

I wasn’t that worried about the defence, it was only the turnover in possession.  I thought young Brandon O’Neill was outstanding on Robert Koren, he kept him quiet along with Milos Dimitrijevic in midfield. We had a number of good players. I think we’re only 30%, there are no trophies given out tonight.”

15’ DEKKER GOAL – Faty is tackled by Fornaroli in defence and he plays in Dekker who is free on goal to slot the ball past Janjetovic.

45+1’ HOLOSKO GOAL – O’Neill wins the ball in the centre of the park and plays an inch perfect pass to Brosque into the box.  He crosses the ball to international marquee Holosko who fires into an empty net to open his account for the club on debut.

28’ ESPINDOLA CHANCE – Koren releases Espindola on the right into a shooting position but he slices it wide.

35’ CITY HIT THE BAR – Trifiro curls a free kick goalwards and it deflects off Matt Jurman onto the bar.

38’ KISNORBO CLEARS – Dimitrijevic curls a free kick to the far post where Kisnorbo puts the ball behind as Smeltz was waiting to slot home.

45’ NINKOVIC CHANCE – Ninkovic bursts into the area but his low powerful shot is gathered by Sorensen.

54′ RYALL CHANCE – A Sky Blues corner is curled into the box and it just evades the outstretched leg of Ryall.

70’ BROSQUE HEADER – Ryall crosses ball after some neat play down the right but Brosque puts his header straight at Sorensen.

77’ GRANT SHOT SAVED – Grant drives forward and plays a one-two with Dimitrijevic before curling a right foot shot towards the far post which Sorensen tips around the corner.

78’ BLACKWOOD HEADER – The resultant corner comes across and Blackwood hits a free header straight at Sorensen.

90’ BLACKWOOD CHANCE SAVED – Rhyan Grant floats a great ball to George Blackwood who is unmarked at the far post but the youngster’s volley is brilliantly saved by Thomas Sorensen at point blank range. 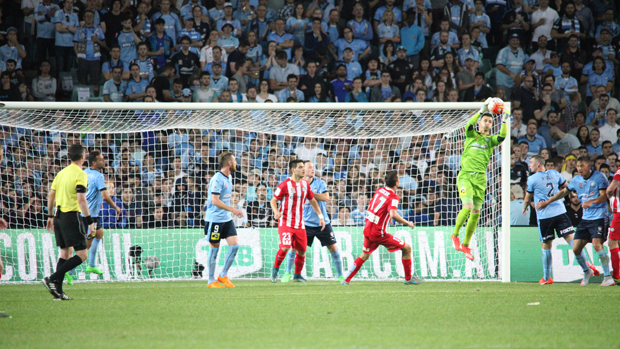