Sydney FC were within a whisker of snatching an equaliser against English Premier League Champions Chelsea FC in an entertaining encounter at ANZ Stadium on Tuesday night.

Sydney FC came within a whisker of holding the English Premier League Champions to a 1 all draw, but a late Seb Ryall goal was chalked off allowing Chelsea to leave ANZ Stadium with a 1-0 win in front of a huge crowd of 83,598.

Loic Remy hit a stunning first half strike for the Londoners but Sydney FC had a number of chances themselves with Alex Brosque having a shot cleared off the line and Christopher Naumoff and Terry Antonis having many more shots blocked.

The game ended a remarkable season for the Sky Blues who head off on a six week break knowing they have an Asian Champions League campaign to look forward to next season.

Graham Arnold: “It was a great experience. Our young boys were exceptional and they set their own standards for next year, they have shown they can do that in front of 85,000 people.   If they can perform like that then a lot of them have bright futures.

“I couldn’t be prouder of the boys. In the last five minutes we had three great chances. It would have been a great thing if we could have got a draw against the English Premier League Champions. Not to be but at the end of the day, the two performances over the two games have been very good.

30’ REMY GOAL – Remy receives the ball wide on the right hand side cuts inside and rifles a left foot shot into the top corner of the net from the edge of the box. 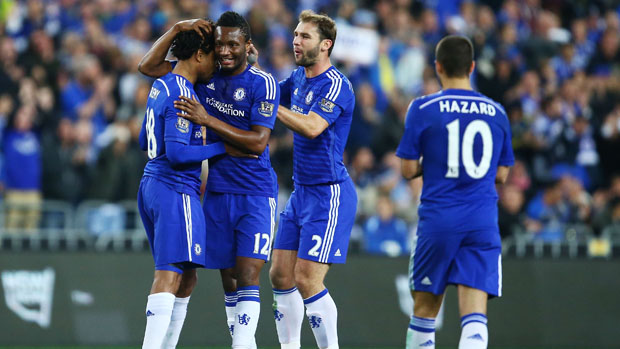 6′ JANJETOVIC SAVE – Diego Costa weaves past a number of defenders into the area and puts the ball through Vedran’s legs but the keeper turns and manages to smother the ball.

31’ NAUMOFF CHANCE – Naumoff is released for a free run on goal however Cech is down low to parry his left foot shot.  Brosque quickly fires the loose ball toward goal but Ivanovic is there to deny the striker on the line for the second game in a row.

45′ ANTONIS SHOT SAVED – Terry Antonis forces a smart save from Cech as his powerful shot is deflected towards goal.

62’ ANTONIS SHOT SAVED – Terry Antonis runs at the Chelsea defence, steps over the ball a couple of times before unleashing a shot which Cech pushes wide for a corner.

67’ GERSBACH CLEARS OF THE LINE – Remy takes a shot having beaten Janjetovic but Gersbach clears off the line with his shoulder.

77’ JANJETOVIC GREAT SAVE – Hazard makes a mazy run through the middle of the park drawing defenders towards him before releasing Christensen to his left who forces Janjetovic into a terrific diving save to his right.

88′ RYALL GOAL DISALLOWED – Seb Ryall taps the ball into the net after a scramble during a corner but it’s ruled out.

90′ BLACKWOOD GOES CLOSE – Ryall does well to keep the ball in play, he crosses over Cech but Blackwood can’t get on the ball.

Graham Arnold made a number of changes to the team who played Tottenham Hotspur just three days earlier.  Janjetovic, Jurman, Faty and Stambolziev all came in at the expense of Necevski, Ryall, Tavares and Ibini.