Sydney FC performed a demolition job on the Central Coast Mariners at Allianz Stadium tonight with a 4-1 win which could easily have been more.

Sydney FC performed a demolition job on the Central Coast Mariners at Allianz Stadium tonight with a 4-1 win which could easily have been more.

The Sky Blues hit the bar twice and came close on numerous occasions but had to settle for just the four goals with Alex Brosque collecting a brace, Mickael Tavares scoring his first goal for the club from the penalty spot and a Jake McGing own goal.

The Mariners were also reduced to ten men in the first half when goalkeeper Paul Izzo was sent off for a second bookable offence, while conceding Sydney FC’s second penalty.

The win puts the Sky Blues joint third on the Hyundai A-League ladder with Melbourne City who they face next on January 2nd  at AAMI Park. 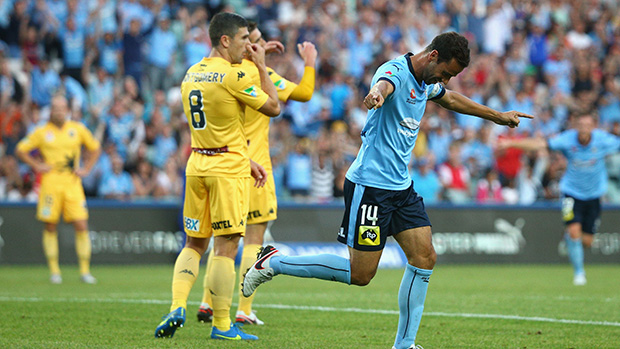 Graham Arnold: “It’s hard sometimes playing against 10 men but the boys played exceptionally well.  We gave away a soft goal at 3-1 but overall we were there, we were much better.

“We had quite a young team out there tonight, when it went down to 10 men they probably got a little bit too excited and dribbled with the ball too much but that’s what kids do and they’ll learn from it.

“Having all those youngsters on the field tonight was something new for Sydney FC and those kids will get better and better as the season goes on. 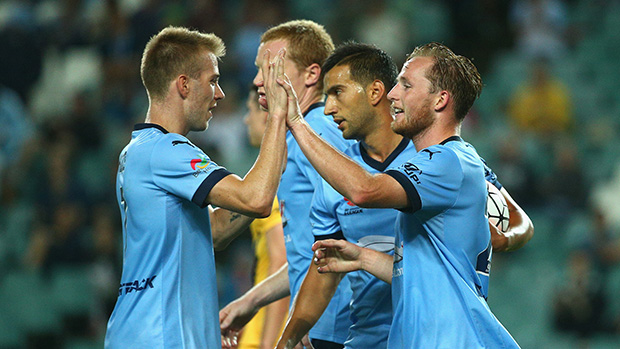 11’ BROSQUE GOAL – Hoole runs at three Mariners players inside the box, flicks the ball to Ninkovic who cleverly feeds it back to Hoole to run on goal.  The forward challenges Mariners keeper Izzo for the ball and it  rebounds up to Brosque to volley into the empty net.

23’ BROSQUE PENALTY – McGing brings down Ninkovic on the edge of the box and Ben Williams points to the spot.  Captain Alex Brosque steps up and sends keeper Izzo the wrong way.

29’ TAVARES PENALTY – Blackwood is played through on goal by O’Neill and Izzo comes rushing out to intercept only to bring the young forward down and pick upa second yellow card in the process.  With Brosque having gone off injured Tavares steps up and calmly side foots the ball home.

38’ ASCROFT GOAL – Sim crosses from the right hand side and finds the head of Ascroft who heads home unmarked.

84’ MCGING OWN GOAL – Hoole plays in Grant on the right as the full back overlaps.  He fires a cross into the six yard box which McGing directs into his own net. 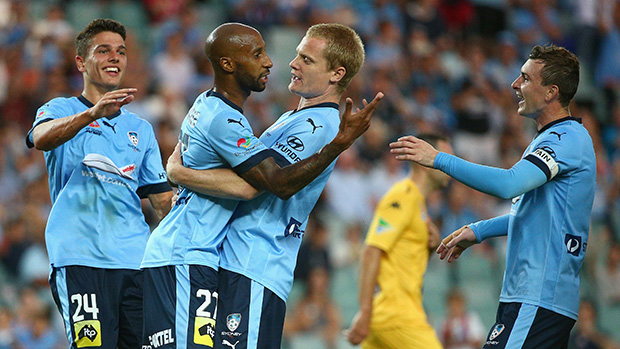 2’ GRANT OFF THE BAR – O’Neill corner sent into the penalty box where Rhyan Grant cannons a header off the cross bar.

21’ RYALL CROSS CUT OUT – A fantastic reverse pass from Ninkovic puts Ryall in a great position close to the byline, he tries to cut the ball back but the ball is cleared.

35’ BLACKWOOD HEADER SAVED – O’Neill clips a cross into the box for Blackwood who heads towards goal but Heward-Belle is down to save.

41’ GRANT SHOT WIDE – Rhyan Grant takes on Josh Rose to open up a chance for a shot but smashes the ball wide.

52’ O’NEILL OFF THE BAR – Brandon O’Neill hits a curling free kick over the wall which skims the top of the cross bar.

56’ SIMON SHOT BLOCKED – An aerial scramble in the box falls to Matt Simon who takes the ball on his chest and volleys towards goal but the shot is blocked by the legs of a Mariners defender.

66’ DIMITRIJEVIC GOAL DISALLOWED – Hoole flicks the ball through to an unmarked Dimitrijevic to finish but the goal is chalked off for off-side.

74’ HOOLE SHOOTS WIDE – Superb cross from O’Neill to the far post to Hoole who blasts wide from a few yards out.

80’ RYALL SHOT SAVED – Ryall receives the ball on the edge of the box , turns and fires a shot at goal which is tipped over by Heward-Belle.

82’ GERSBACH SHOT SAVED – Gersbach runs at the Mariners defence on the right hand side and angles a low shot just inside the post but the keeper is down quickly to save.

Head Coach Graham Arnold made three changes to the team which was denied by a late Wellington Phoenix penalty seven days earlier.  Captain Alex Brosque came in to replace Matt Simon up front while young 18 year old attacker George Blackwood replaced the suspended Filip Holosko.  At the back Alex Gersbach came in for Jacques Faty.