Sydney FC are through to the Hyundai A-League Grand Final after slaughtering Melbourne Victory 6-1 tonight at Netstrata Jubilee Stadium in the perfect revenge for last year’s heartbreaking semi final loss. 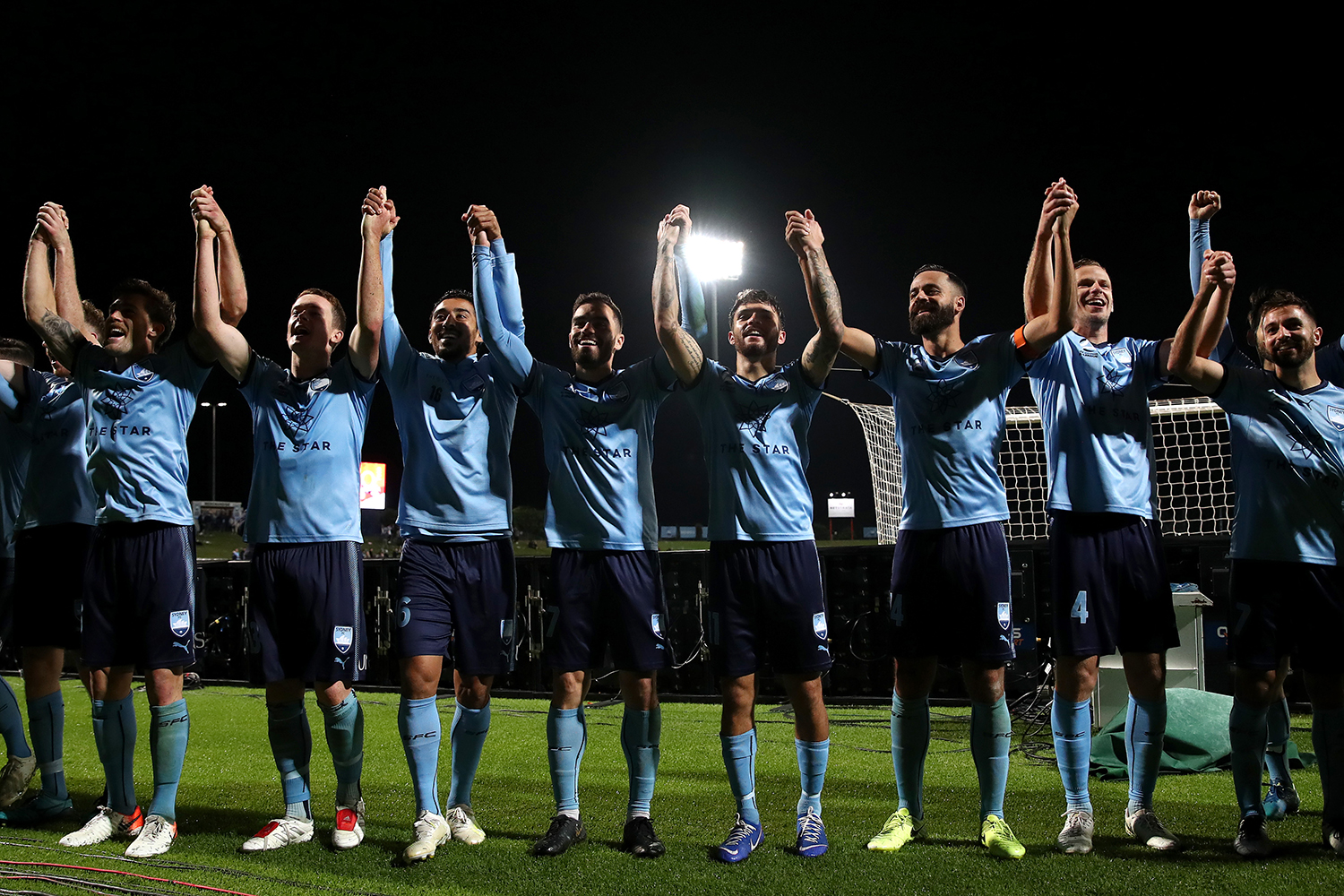 1. Calver Goal 3’ – Sydney FC take an early lead after a mistake by the Victory keeper on his line from a corner allows the Sky Blues defender to pounce on it from close range and put it in the back of the net.

2. Thomas Save 15’ – The Sky Blues continue to dominate early proceedings and Socceroos star Rhyan Grant has a ping from outside the area but a full-stretch save from the Victory keeper denies the home side a second goal.

3. Skipper Stands Up 43’ – Just moments before the half-time whistle the legendary Alex Brosque delivers a second goal for his side, brilliantly belting a side-footed volley past the Melbourne shot-stopper.

4. Trifecta In The First Half 45’ – Sydney FC looked certain to take a 2-0 lead into the sheds but an own goal from Melbourne captain Leigh Broxham on the stroke of half-time gives the Sky Blues a massive lead.

5. Thomas Save 51’ – Another good attempt from Grant is blocked again by the Victory keeper, who keeps his side’s slim chances alive early in the second half.

6. Le Fondre Penalty 63’ – A great ball from Brosque to Le Fondre and an ugly foul from a Melbourne defender allows the Englishman to step up and all but secure a Grand Final berth for the Sky Blues.

7. Sydney Five-O 69’ – A breathtaking ball from Milos Ninkovic gets Le Fondre one-on-one with the Victory keeper and he makes no mistake to give Sydney FC an amazing 5-0 lead with just over 20 minutes remaining.

8. Redmayne Save 82’ – The Sydney FC keeper had barely been called upon tonight, but a great save from Andrew Redmayne with less than ten minutes remaining on the clock keeps the visitors scoreless.

9. Icing On The Cake 88’ – A well-deserved goal for maestro Milos Ninkovic with only a few minutes left on the clock gives the Sky Blue faithful one last moment to remember heading into next week’s decider.

10. Toivonen Goal 90’ – The Victory front-man tries to spoil the party a little bit at the death, but the Sydney FC fans are having none of it as they march towards the Grand Final with a 6-1 win. 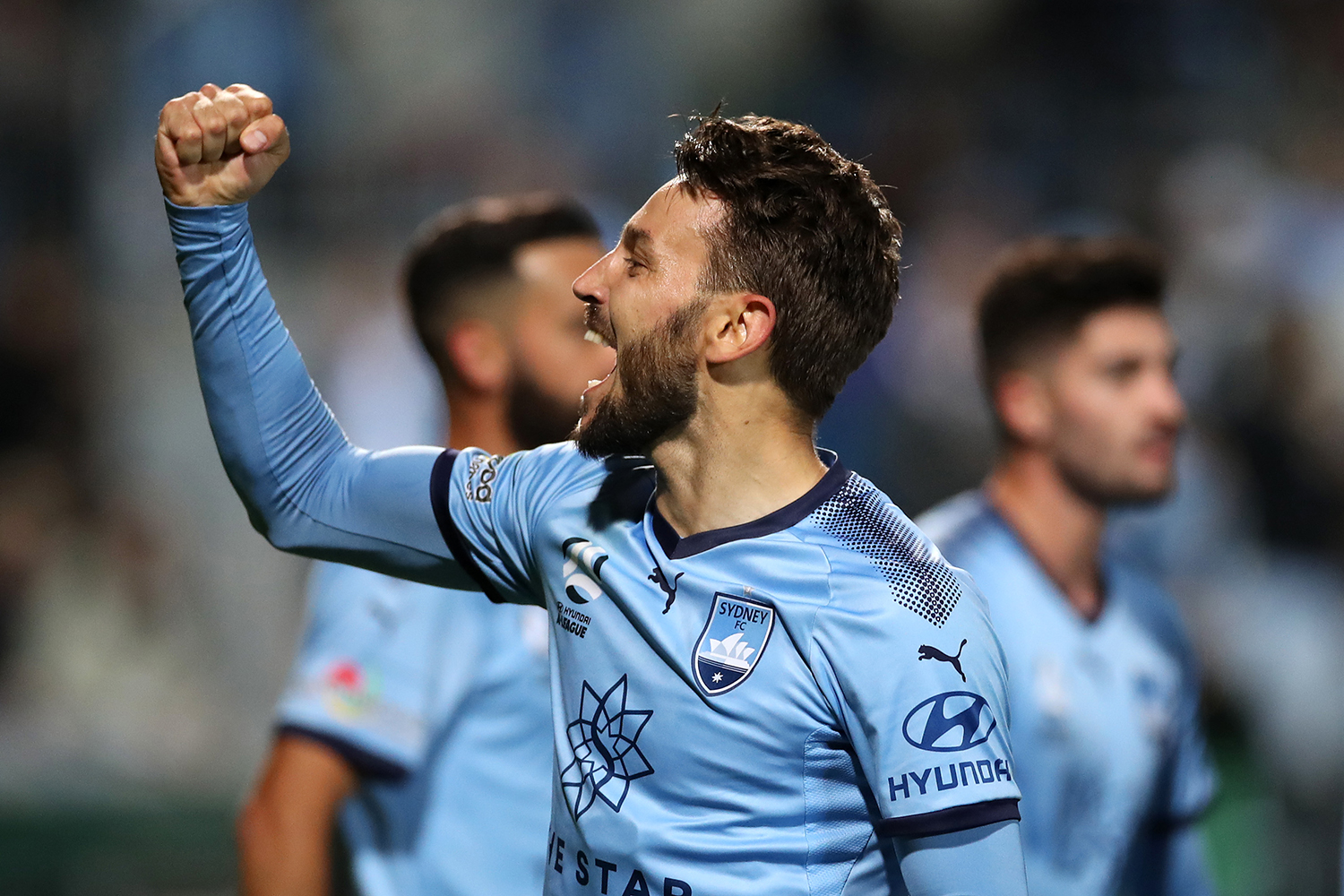 Sydney FC have secured a spot in the Hyundai A-League Grand Final after an amazing 6-1 triumph over longtime rivals Melbourne Victory tonight at Netstrata Jubilee Stadium in front of a boisterous crowd of over 12,000 Sky Blue fanatics.

It was all Sydney FC in the opening 45 minutes, and it showed on the scoreboard heading into the break with goals to Aaron Calver, Alex Brosque and a Leigh Broxham own goal in a fantastic first stanza for the home side.

Calver pounced on some sloppy work from Victory keeper Lawrence Thomas just three minutes into the contest, before the skipper Brosque doubled the lead with a sublime finish in the 43rd minute.

Just as it looked like the Sky Blues would take a healthy 2-0 lead into the sheds, there was another wrinkle in an exciting first half as an own goal from Victory captain Leigh Broxham gifted the Sky Blues an astounding three-goal buffer.

It was more of the same in the second half but it felt as though the Sky Blues were ready to completely put it to bed – and a 63rd minute foul on Adam Le Fondre inside the area gave the Englishman the chance to make it a four-goal lead and he made no mistake.

Five minutes after his classy goal from the spot, Alfie stepped up again after a beautiful ball from Milos Ninkovic got him one-on-one with Thomas and the Sky Blues No.9 made no mistake as they extended their lead to five.

A well-deserved goal for the Sky Blues No.10 in the 88th minute sent Kogarah into raptures as the reality of a Grand Final berth in seven days time began to truly dawn on them.

A late goal from Ola Toivonen was a mere consolation after the Sky Blues absolutely massacred their opponents forcing them to endure their heaviest ever A-League defeat and will go into next Sunday night’s decider against Perth Glory with a mountain of confidence. 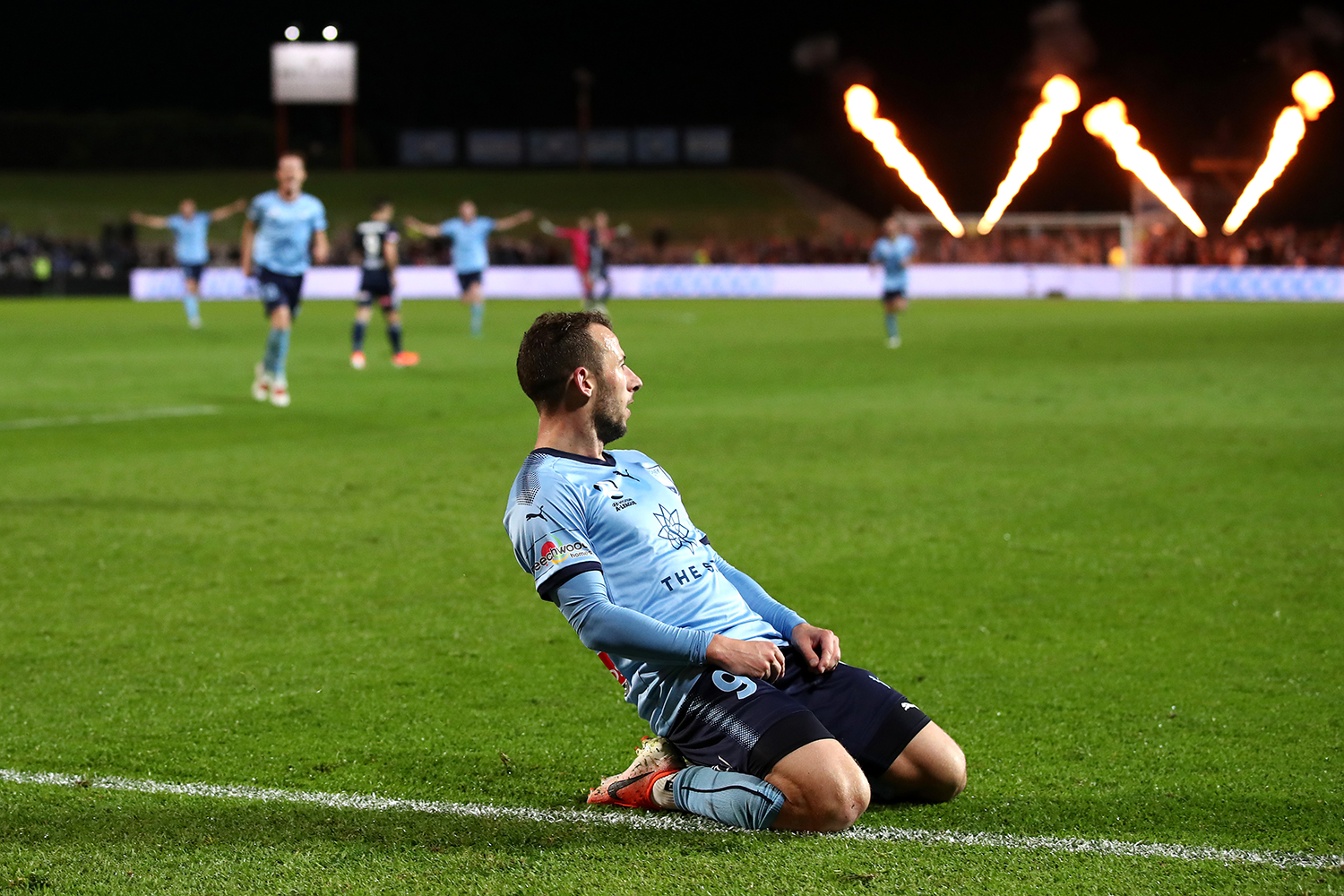 Head Coach Steve Corica: “We were very confident going into the game and knew we could get the win. Kogarah is great, we love playing here and the surface was great. The boys played exceptionally well and the goals came tonight. Defensively we were outstanding and once we started getting goals we kept pushing for more and kept moving forward which was great to see.

“I said to them at halftime I wanted them to keep going and put on a good show for the fans which we definitely did because they were outstanding. Brosquey led well from the front and I thought Siem had probably his best game for us tonight. They all looked fresh and the extra day after the game in Korea worked for us.

“I had a good feeling before the game, I felt very calm because of the way we had been looking at training leading into the game tonight I was very confident. Once we got that second goal I felt that we could have went on with it and we certainly did that.

“I’m very excited and I’m very proud of the boys. This is about them and not me, I’m just here to point them in the right direction and they all have the talent and experience. Going to Perth will be no different, we have beaten them over there this year already and it will be a great challenge for us.

“I did mention last year’s semi final in the sheds before they went out tonight. I did try and keep it quiet during the week but a lot of those guys tonight were here last season and that obviously hurt us. I wanted them to right that wrong and they did it tonight in a fantastic display.

“We’re not getting carried away, I’ll make sure they come back down to earth because Perth are a good side and we need to be ready and focused for whatever they are going to throw at us in the Grand Final. Whatever they throw at us, we are going to give it back.” 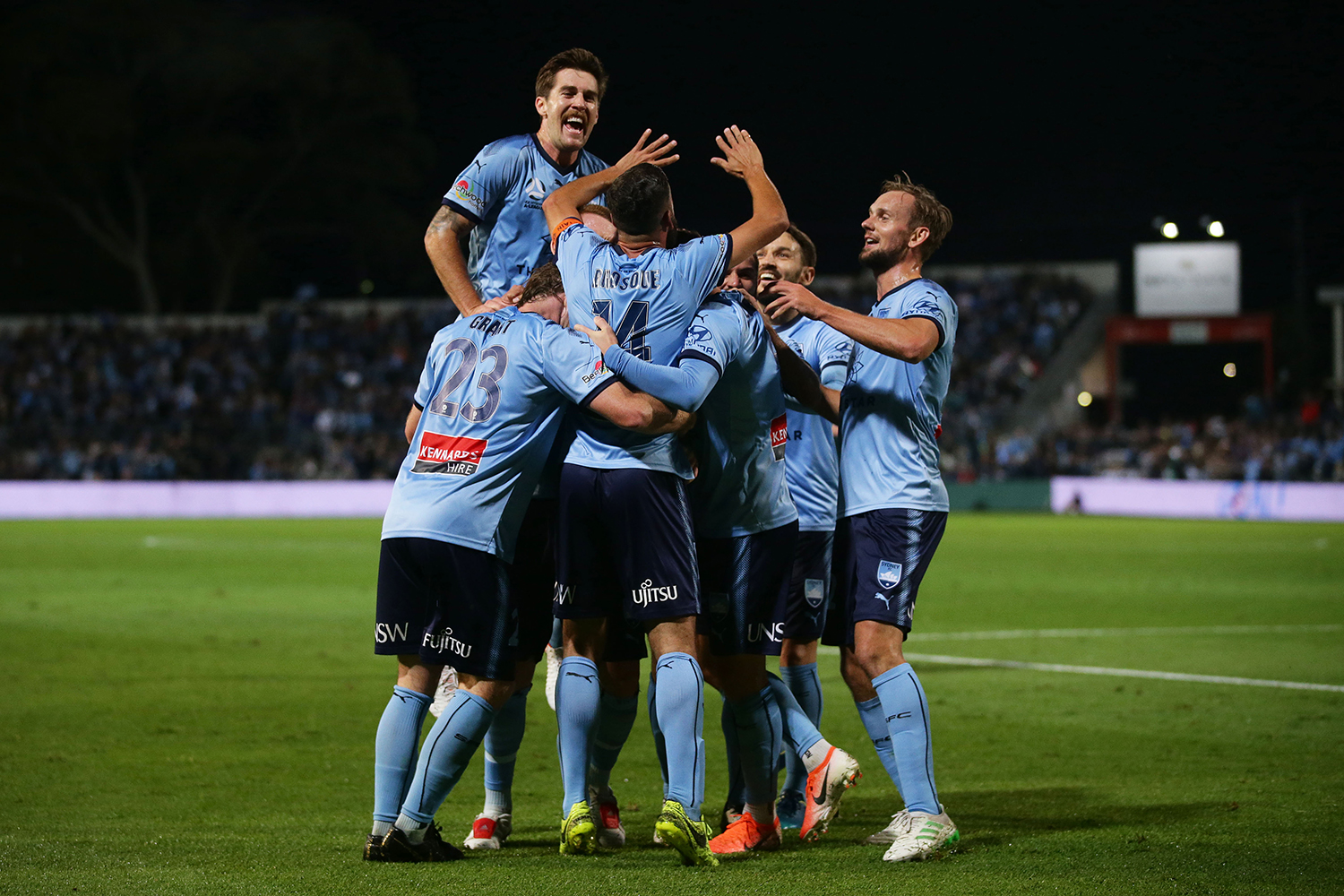