Sydney FC have won their first pre-season game against Earlwood Wanderers tonight, taking out the Johnny Warren Community Challenge with a comprehensive 12-0 victory.

Filip Holosko scored four goals in the opening twenty minutes to give the Sky Blues a strong start before Milos Dimitrijevic made it five with a smart volley in the 25th minute.

Head Coach Graham Arnold gave Sky Blues Academy players a chance to impress in the second half, substituting his starting eleven for the youngsters on the bench.

Striker Mani Gonzalez came away with a hat-trick, while Cooper Cosherie, Chris Arditti, Nicola Kuleski and Filippe Zapata also got on the score sheet.

The game gave Sydney FC a chance to maintain closer links with one of the city’s local football club.

Joshua Brillante:  “It was a great start for me.  Playing in my first match and getting to know everyone else’s game.  It’s only been a couple weeks of training so we’re continuing to work hard and get ready for the season.”

Filip Holosko:  “The game is definitely better than training.  It’s good for our confidence.  Pre-season is when we need to work hard and work on getting fit for the A-League season.

“We still have a lot of time for pre-season, we’ve only trained for three weeks and there is still another two and half months.” 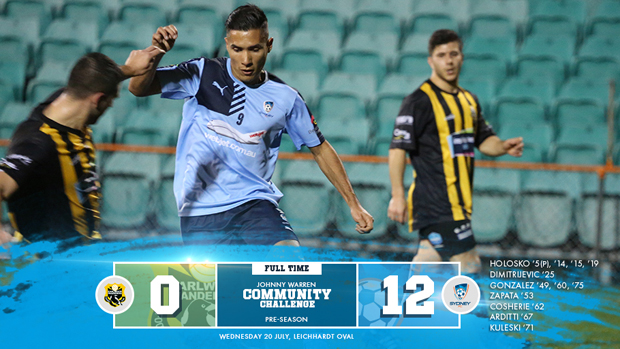 5’ HOLOSKO PENALTY – Holosko steps up after Matt Simon was tripped in the box and sends the keeper the wrong way, putting the ball into the bottom left corner.

14’ HOLOSKO GOAL – Great cross from Carney on the left hand side.  Holosko, free at the back post, calmly side foots it into the bottom right corner.

15’ HOLOSKO GOAL – Mistake from the Earlwood defender sends Holosko through on goal, smashes the ball into the back of the net.

19’ HOLOSKO GOAL – Scrappy corner isn’t cleared by the Earlwood and Holosko taps it in from close range.

25’ DIMITRIJEVIC GOAL – Carney with the cross from the left hand side, met with a full volley by Milos Dimitrijevic who was unmarked in the box.

49’ GONZALEZ GOAL – Cross from the corner met by Spyrakis who heads it towards the far post and it’s finished off by Gonzalez from point blank range.

53’ ZAPATA GOAL – Through ball latched onto by Mani Gonzalez who rounds the keeper and crosses to Zapata to put the ball away.

60’ GONZALEZ GOAL – Fantastic interchange of passes between the Sydney youngsters on the edge of the box, Gonzalez with the deft turn to beat his defender and finish into the bottom corner.

62’ COSHERIE GOAL – Ball put across the face of the goal and finished off by Cosherie under pressure from the Earlwood defence.

68’ ARDITTI GOAL – Fantastic through ball from Araujo to find Arditti who slots it past the keeper at the near post on the left penalty box channel.

71’ KULESKI GOAL – Smart darting run down the right wing from Kuleski who smashes it past the keeper at the near post, sending him the wrong way.

75’ GONZALEZ GOAL – Keeper gives the ball straight to Gonzalez who beats the defender and puts the ball into the back of the net.

17’ SIMON DISALLOWED GOAL – Cross in from Holosko is met by Simon who puts it away but is called back for offside.

21’ CARNEY CHANCE – Ball falls to Carney on the edge of the box, he works it to his left foot before shooting it just over the bar

37’ HOLOSKO CHANCE – One-two between Holosko and Dimitrijevic opens up space for Holosko but he pushes the shot wide.

75’ ZAPATA HITS THE POST – Filippe Zapata with the final shot off a well worked move down the right hand channel but it strikes the outside of the post.

Subs not used: None