Corey Gameiro continued his goal scoring feats with a well taken diving header from an excellent Alex Brosque cross in 25 minutes, before the Sky Blues Austrian International marquee Marc Janko put the result beyond doubt with quarter of an hour to go, turning to hit a sharp left foot shot from outside the box.  The goal was the 31 year old’s first for the club.

The win caps an excellent week for Graham Arnold’s men who won all three games, keeping a clean sheet in the Final and they have now secured wins in seven out of their eight matches in pre-season.

Graham Arnold: “It’s great for confidence. We’ve made a lot of changes around the squad and it’s great to see the players are buying into that.

“I’d like to give full credit to the players who worked extremely hard this week however I think we’re still only at 50%.

“Form at the minute means nothing, I’m just delighted that we’ve had a wonderful ten days up here, fitness has been the key ingredient, we still have a lot of work to do on the training field but we go home with no injuries.

“It’s great to win the Townsville Cup but at the end of the day I’d rather be holding a different trophy up in May next year.” 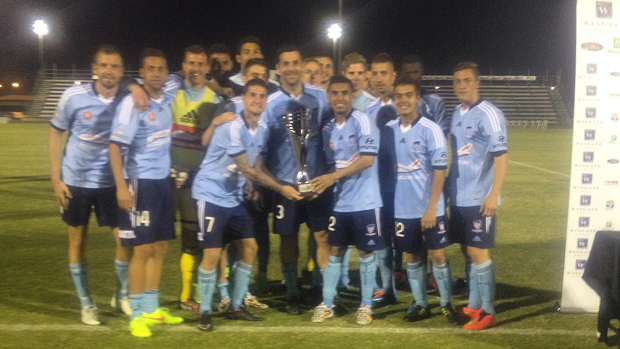 Sasa Ognenovski: “It’s pre-season and we’re just trying to get through games, not get injured and work on the ball, work on the training field.

“Obviously it’s always good to win silverware and hopefully we can take our form and gain some momentum going into the season.”

25’ GAMEIRO – Sydney FC break through Brosque down the left hand side and the striker swings over a fabulous left footed cross which Corey Gameiro dives to head into the bottom right hand corner of Theo’s net to give the Sky Blues the lead.  The goal makes it 11 in 8 appearances for Gameiro this pre-season.

75’ JANKO – The Austrian striker opens his account for the Sky Blues after receiving a pass just outside the box, the big striker turned unmarked and struck a low left foot shot inside the left hand post of Michael Theo.

10’ NAUMOFF SHOT SAVED – Sydney FC’s Ali Abbas makes a run towards goal from central midfield and fires in a shot from 25 yards.  The shot is blocked an and rebounds to Naumoff who hits a rasping drive from the centre edge of the penalty box which Theo gets down well to gather.

13’ PETRATOS SHOT SAVED – Brisbane press the Sydney FC goal and the ball eventually comes back to Petratos who rifles a shot straight into the arms of Janjetovic.

58′ DISALLOWED GOAL – Broich gets to byline to hit a cross which takes a deflection and as the ball bounces around in the six yard box Petratos forces it over line with his hand and is booked.

Vedran Janjetovic was given his first start of the tournament by Head Coach Graham Arnold with Ivan Necevski moving to the bench.  Matt Jurman returned to the starting line up at the expense of young left back Alex Gersbach while Hagi Gligor replaced the injured Terry Antonis from the eleven which started against Newcastle Jets.