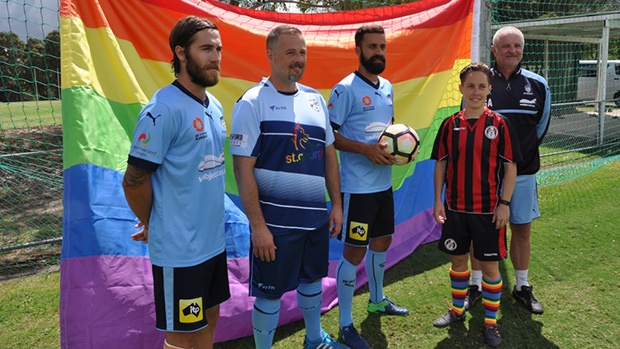 Sydney FC continued to wave the rainbow flag at their Round 22 #BigBlue against Melbourne Victory at Allianz Stadium to help promote inclusion, harmony and diversity in sport.

It was the third year in a row the Sky Blues have shown support for Mardi Gras with the annual festival taking place on the doorstep of Sydney FC’s home ground of Allianz Stadium the night after the match.

The Sky Blues teamed up with Sydney Rangers FC, Australia’s first football club for gay men, and The Flying Bats Women’s FC, Australia’s oldest and the world’s largest lesbian football club, to support their local LGBTIQ (Lesbian, Gay, Bisexual, Transgender, Intersex and Queer) community and to raise awareness of the campaign to tackle discrimination in sport.

A number of activities took place on the night with a large rainbow flag held by 12 players from the two clubs as the players walked out onto the pitch, with a further eight players waving rainbow flags on the field of play.

Sydney FC players wore rainbow laces in their boots, while 2,000 laces were also be handed out in the Allianz Stadium forecourt prior to the game, among other activities. 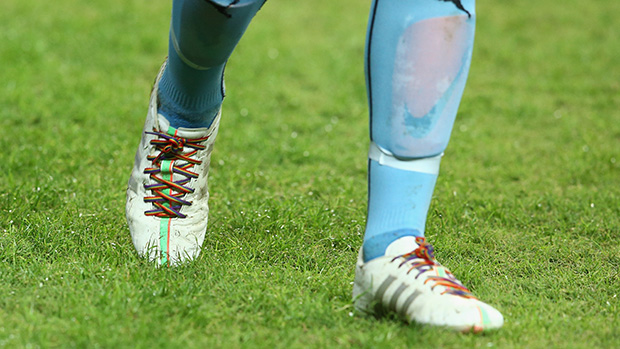 Captain Alex Brosque said the partnership was a welcome step in the right direction.

“Raising awareness about the importance of promoting inclusion and tackling discrimination in football, and sport generally, is huge.

“We have a multi-cultural and diverse community and supporter base at Sydney FC and we are committed to welcoming everyone into the Sky Blue family and to our games.”

“The Sydney FC family is inclusive of everyone and we do not discriminate on account of gender or sexuality,” Pignata said.

“We are proud to be the first Hyundai A-League club involved in growing such initiatives over the last few years and I hope others will follow suit.” 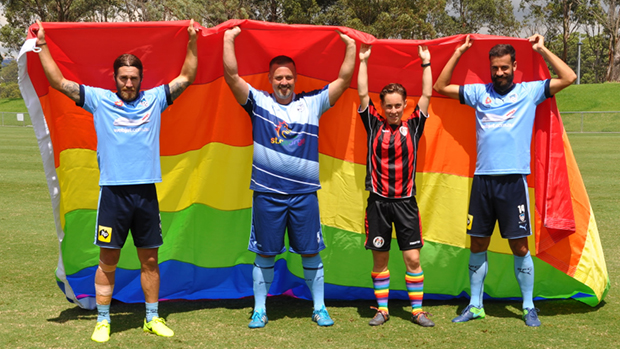 The Sky Blues have worn rainbow laces and been represented among the Mardi Gras floats in recent years.

Joseph Roppolo, President of Sydney Rangers FC said: “We are really happy with Sydney FC’s commitment and leadership on the issue of addressing homophobia in football and we look forward to working proactively with the FFA and the other Hyundai A-League clubs to promote an inclusive, positive and clear message that football is for everyone.”

Emily Shrubb, President, The Flying Bats Women’s FC said: “We applaud Sydney FC’s initiative in promoting inclusion for LGBTIQ players and fans and are proud to be involved.

“It’s great to see the Hyundai A-League follow on from the support for diversity and inclusion from the FFA and the inclusive atmosphere of the women’s game in the W-League. Happy Mardi Gras, Sydney!”

Out On The Fields, the first international study on homophobia in sport, found that 80% of Australians had reported witnessing or experiencing homophobic behaviour in sport, while only 1% felt that gay people were completely accepted in sporting culture.