Sydney FC have become only the third team in Hyundai A-League history to win their first four games of the season.

The Sky Blues defeated Newcastle Jets 2-0 thanks to goals from Alex Brosque and Milos Ninkovic to remain top of the Hyundai A-League on a maximum 12 points.

Sydney FC can extended their best ever start to a season when they face Melbourne Victory at Allianz Stadium on Saturday for the beyondblue Cup (kick off 7.50pm).

Brandon O’Neill: “Outstanding performance from us again, we’re working very hard without the ball, with the ball we’re trying to go forward as much as we can and we’re scoring goals and conceding none which is the main thing in football.

“In saying that, I still think we can improve in areas, myself included but really exciting to be winning football matches.

8’ BROSQUE GOAL – Duncan’s clearance is won by Zullo and falls to Ninkovic who plays a first-time ball to Brosque, he chests down into the box and finishes with his left foot across the keeper Duncan.

49’ NINKOVIC GOAL – O’Neill does brilliantly to win the ball in midfield as the Jets dally on the ball.  Holosko receives it and drives at the Jets defence and shoots across Duncan who parries the ball out to the edge of the box to Ninkovic to side foot back past him.

10’ JURMAN CHANCE – Brillante’s in-swinging left wing free kick is flicked on by a Newcastle Jets head and Jurman at the far post volley’s just over with a right foot shot.

11’ HOLOSKO GREAT CHANCE – Ninkovic plays the ball over back line of the Newcastle Jets defence where Vujica fails to clear.  The mistake allows Holosko to break free on goal but the Slovakian’s first touch is slightly wide and as he rounds the keeper he hits the side netting with a shot from an acute angle.

20’ BOBÔ CHANCE – A right wing free kick is swung into the box where Bobô meets it but his downward header is wide of the far post.

45’ UGARKOVIC MISS – A ball into the Sky Blues box isn’t dealt with and finds its way to Hoole who plays the ball back to Ugarkovic for a free shot on goal but the midfielder puts it wide under pressure from O’Neill.

57’ O’NEILL HITS POST – Sydney FC are awarded a free kick five yards outside the edge of the box.  O’Neill curls a right foot shot around the wall which grazes the bottom part of the post and goes behind.

75’ O’NEILL SHOT – Jets give the ball away and Bobô finds O’Neill who takes a long range shot which goes just past the edge of the post.

78’ JURMAN SHOT CLEARED OFF LINE – A left wing corner is fumbled by goalkeeper Duncan to Jurman who shoots towards goal but Vujica is there to clear off the line.

90’ GREAT VUKOVIC SAVE – A cross from the Jets right falls to Hoole who hits it first time into the corner but Vukovic is down to save with a powerful right hand. 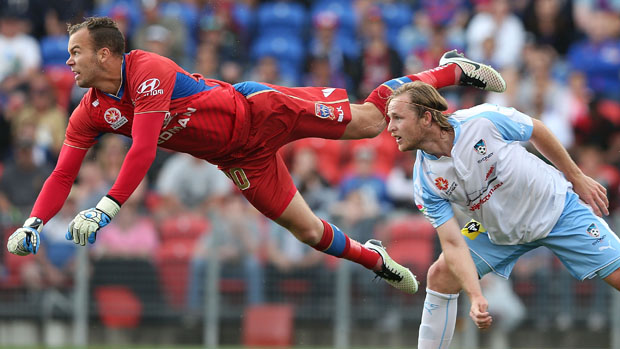 Head Coach Graham Arnold made one change to the side which defeated Wellington Phoenix last Saturday night.  David Carney, who had been suffering from a virus during the week was replaced by Alex Brosque.

Sydney FC 2016/17 Memberships are NOW ON SALE.  Sign up for a full ticketed adult Membership for as little as $230.