Captain Brosque is set to undertake his seventh year at the Sky Blues, and his third in succession after re-joining Sydney FC at the commencement of the 2014/15 season.

In his 144 Hyundai A-League games for the Sky Blues, Brosque has scored 40 times, including five goals from 13 games in the 2015/16 campaign, and the Sky Blues’ captain said he was pleased to be extending his stay for another season.

“This club is one big family to me, I’ve got unfinished business from last season and I’ve been doing a lot of work in the off-season to get back to where I want to be.

“I’m raring to go this year and I’m as hungry as ever to take out all three trophies. We’ve added a lot of quality players to the squad and I’m excited to see this squad fulfil the potential that is on offer.” 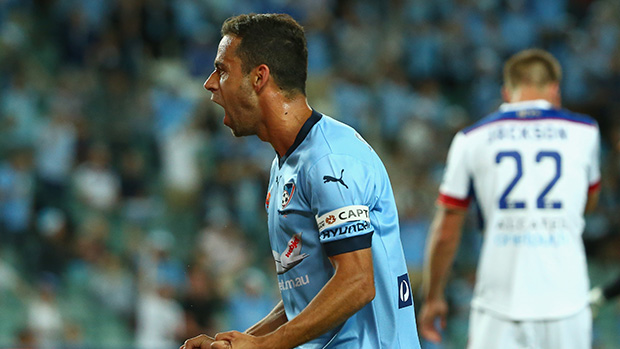 Head Coach Graham Arnold said he was pleased to have to Brosque locked in for a further season.

“Alex Brosque’s importance to Sydney FC was evident through his absence last year. He is an exceptional player and a great leader,” Arnold said.

“It’s great to have him back at full fitness and firing on all cylinders this season.

“His addition means we have some real top quality players in the squad this season and I’m confident we will go very close in all three competitions.”

Brosque’s renewal brings the Sky Blues’ Hyundai A-League 2016/17 complement to 19 players ahead of the season kicking off in October.