Sydney FC have battled back from two goals down to secure a two-all draw in a game they could have taken all three points.

DAVILA GOAL PENALTY – 8’ – Warland loses the ball to Davila and he goes into the box where he is felled by the Heward-Belle.  He picks himself up and shoots low into the corner to make it 1-0.

BARBAROUSES GOAL DISALLOWED – 16’ – A ball over the top from Amini to Grant sees the full back reserve the ball to Barbarouses who finishes but Grant is waved offside.

BUHAGIAR SHOT SAVED – 20’ – Buhagiar runs clear and hits a shot across Kurto who tips it wide.

HEWARD-BELLE SAVE – 25’ –  A nod down falls to Jovanovic who shoots and Heward-Belle makes a reactive save.

SUSNJAR GOAL – 25’ – M’Mombwa crosses to the back post and Susnjar volleys home.

BUHAGIAR GOAL – 39’ – Great ball from Burgess to Talbot down the line allows the left back to hit a perfect cross into the path of Buhagiar to slot home.

SUSJNAR OWN GOAL – 53’ – Le Fondre plays Burgess who takes an amazing touch and puts over a cross which Susnjar can only volley into his own net.

HEWARD-BELLE SAVES – 84’ – Ruhs gets clear on the left and smashes shot which Heward-Belle saves with his face.

What They Said: Steve Corica: “I’m very proud of the comeback from the boys and we dominated all of that second half, but it was sloppy play that led to the first goal and a set piece for the second goal.

“We had our chance early on that hit the post and one that was ruled out for offside but you can’t put yourself in that position of being two goals down and expect to come back every game.

“I was a little bit disappointed with the first half but proud of the second half performance.”

Sydney FC have earned a deserved point and should have taken all three after battling back from two goals down.

Kosta Barbarouses hit the post early on before Heward-Belle conceded a penalty after Warland had lost the ball in a dangerous position.

Davila stepped up for Macarthur to put the ball away before Susjnar doubled the lead with a fine volley on 25 minutes.

The Sky Blues had already had a goal ruled out before Trent Buhagiar reduced the deficit with a fine finish from Talbot’s cross just before half time.

Sydney FC were back on level terms early in the second half when an exquisite touch from Burgess gave him a crossing opportunity and Susjnar put into his own net.

The Sky Blues pressed for the remaining 35 minutes and had a very good shout for a penalty turned down but the game ended in a point a piece. 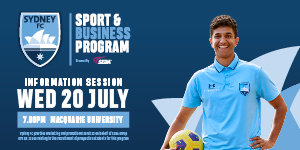 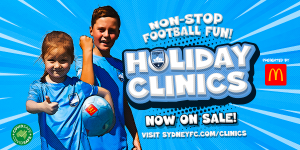