Sydney FC coach Graham Arnold revealed a text he read out before the game added extra motivation to his side in Saturday night’s Sydney Derby.

The text came from a young man who is doing it tough with some health issues.

“I had a beautiful text this morning from a kid called Gabby who sat next to me in the derby last year, who has cancer.

“He said he’d be watching the game and that this type of game and a sky blue win gives him reason to live.

“And I read that to the boys before the game. And you could see the hunger straight away in the players’ faces that they wanted to do it for that boy,” said Arnold, clearly emotional. 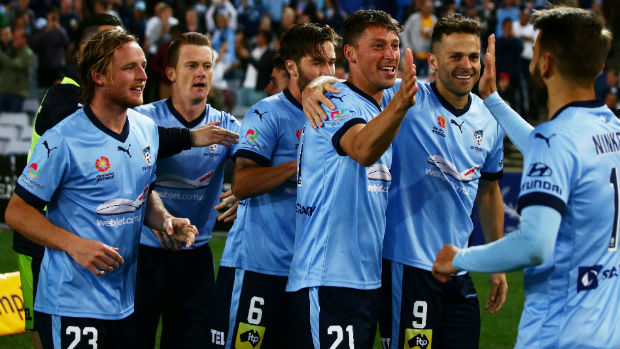 As for the game itself, Arnold agreed 4-0 wasn’t representative saying the first half was an arm wrestle and fighting for the second ball.

“We spoke at half time about the belief. The belief of quality in this squad of keeping the ball and moving it around and being positive with the ball.”

Arnold agreed his front four were sensational against a poor Wanderers defence.

“It gives me good headaches. I spoke to the boys about having to disappoint 4-5 players to leave them on the bench.

“Just look at who we had on the bench?” said Arnold, amid the sound of a singing Sydney FC dressing room.