A late David Carney header has ensured Sydney FC restored their seven point lead at the top of the Hyundai A-League and go into the second half of the season undefeated.

Carney’s 77th minute strike came just a minute after the Mariners had drawn level at 2-2 through Scott Galloway.

Sydney FC’s Brazilian striker Bobô had earlier given the Sky Blues a 2-0 lead with a superb opening strike followed by a simple tap in thanks to good work from Milos Ninkovic.

Roy O’Donovan pulled one back for the hosts before Fabio Ferreira missed a penalty to square the ledger.

The Sky Blues also had to overcome the loss of centre half Seb Ryall in just the second minute of the match with midfielder Brandon O’Neill filling in for the remaining 88 minutes.

The result means Sydney FC are undefeated in 14 games with the Sydney Derby on the horizon next Saturday night. 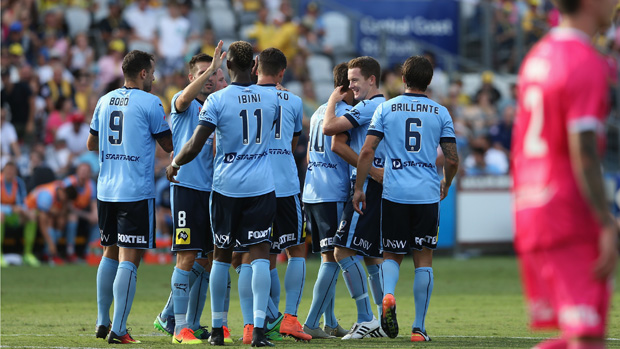 Graham Arnold: “I had enough confidence in what we had going forward to still win the game (at 2-2).

“We were probably our worst enemies. In the first half we totally dominated and we should have scored more than one goal.

“At 2-0 we had another chance but at the end of the day you have to give the Mariners full credit for the way they played.

“I think we showed some fantastic character with the reshuffle when Seb Ryall went off and Brandon O’Neill having to go back to stopper.

“At the end of the day we are happy with the three points.”

43’ BOBÔ GOAL – Holosko finds Bobô with a header and the Brazilian turns brilliantly to beat four defenders and fire home with a sublime strike.

48’ BOBÔ GOAL – Superb work from Ninkovic who beats two Mariners defenders and the keeper to give the ball to Bobô to tap into an empty net.

66’ O’DONOVAN GOAL – A free kick from the Mariners left hits a Sydney FC head and goes back across goal where O’Donovan is waiting to pounce.

76’ GALLOWAY GOAL – A ball over the top finds O’Donovan who shoots but Vukovic saves it, however the ball rebounds to Galloway to fire home from close range.

77’ CARNEY GOAL – Ninkovic finds Zullo on the left and the full back curls an inch perfect cross into Carney to head into the empty net. 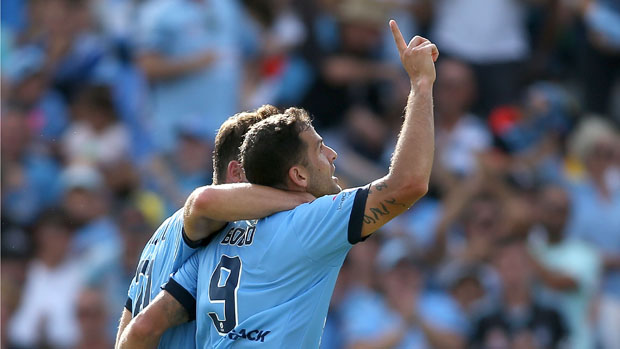 2’ RYALL INJURED – Seb Ryall goes down awkwardly holding his leg and is carried off to be replaced by Brillante.

8’ HOLOSKO CHANCE – Ninkovic finds Holosko who holds off his marker and shoots but Izzo saves.

16′ HOLOSKO CHANCE – Holosko gets behind the Mariners defence after a mistake in the back line but his shot is saved by Izzo’s legs.

18’ BOBÔ CHANCE – Bobô gets clear on the right and enters the box but his shot is saved by Izzo who pushes it around the post.

37’ POWELL CHANCE – Roux floats the ball to the back post where Blake Powell arrives but misses his kick from two yards.

71’ PENALTY MISS – Pain goes down in the area and referee Beath awards a penalty. However Ferreira steps up and blasts the ball way over the bar.

79′ BOBÔ CHANCE – A cross from the Sydney FC left lands on the head of Bobô but he puts it over the bar. 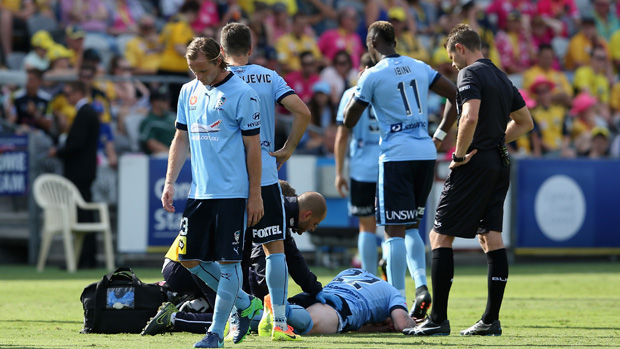 Head Coach Graham Arnold was forced into a number of changes with Alex Brosque suspended and Matthew Jurman headed overseas.  Bernie Ibini came in for his first start of the season with Sebastian Ryall moving from the bench to the centre back role and also captain the side.  Milos Dimitrijevic replaced Josh Brillante in the centre of midfield with the latter moving to the bench alongside George Blackwood and new goalkeeper signing Andrew Redmayne.