Brosque will bring his tenure as Sydney FC captain to four seasons as he eyes a Hyundai A-League Premiership and Championship defence in season 2017/18.

The Sky Blues leader was an integral member of the double winning squad, finishing as the second highest goal scorer at the club with 11 goals, while also laying on five assists.

Brosque said he was excited to be remaining a Sky Blue and set his sights on even more silverware in 2017/18.

“I’m very happy to be staying on for another year,” Brosque said.

“After the incredible highs of the season just gone we want to carry that on into next year and have another successful season.

“I believe we’ll be even better next year, retaining the core of the squad, and I’m looking forward to season 2017/18 getting underway.” 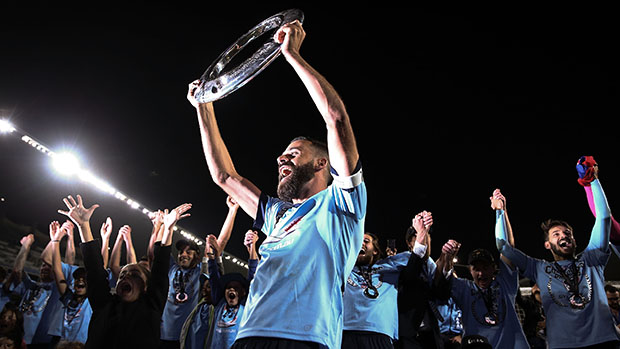 Sydney FC Head Coach Graham Arnold said it was an easy decision retaining the club captain, and said he expects even more from him in the new season.

“Brosquey is a major part of everything we do at the club, not just on the field but off it as well,” Arnold said.

“He’s a leader and mentor for both the young and experienced players, he brings the dressing room together and I expect him to continue to live up to the standards bestowed upon him as Captain in season 2017/18.

“It’s a pleasure to have Brosque at the club and long may our form continue in the new season.”

Alex Brosque will lead the Sky Blues out against English Premier League heavyweights Liverpool FC at ANZ Stadium tomorrow, before departing on holidays and reporting for pre-season with the remainder of the squad in July.