Sydney FC 14 Games Unbeaten And Top of the League

Sydney FC has extended its unbeaten streak to 14 games to remain top of the Hyundai A-League following a pulsating 1-1 draw against Brisbane Roar at Suncorp Stadium.

The Sky Blues were foiled numerous times by Roar keeper Michael Theo after midfielder Josh Brillante had given Graham Arnold’s men the lead with a superb strike in the 14th minute.

Thomas Kristensen equalised for Brisbane against the run of play just before half time but Sydney FC continued after the break and Theo again denied the likes of Brosque, Ninkovic, O’Neill and Ibini in particular.

Sydney FC are six points clear at the top of the table and are unbeaten in 14 games in all competitions.  We face Champions Adelaide United next Saturday at Allianz Stadium at 7.50pm.

Graham Arnold: “I thought it was a fantastic performance.  The only thing I can be disappointed in is that we didn’t get all three points.  Performance-wise it was our best performance of the season.

“In the first half we totally dominated them and suffocated them and they couldn’t get out of their half.  We had four or five great chances to go in two or three nil up at half time.

“We had a lapse in concentration just before half time and we got punished but overall it was an outstanding performance and I couldn’t be happier.” 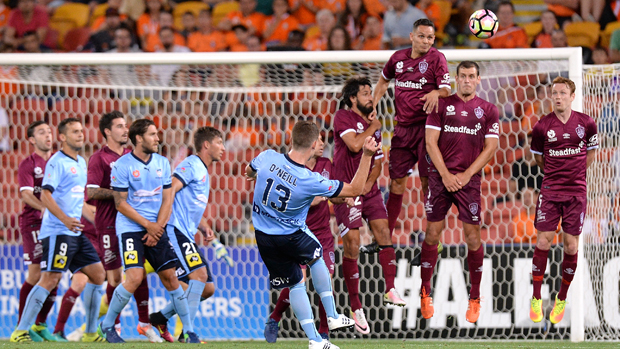 14’ BRILLANTE GOAL – Sydney FC’s relentless pressing forces Brisbane into giving the ball away to Josh Brillante who fires in a rocket from 20 yards. Top corner.

40’ KRISTENSEN GOAL – Kristensen hits one with the outside of his boot into the bottom corner from the edge of the box against the run of play.

20′ NINKOVIC HEADER CLOSE – Cross from Zullo is headed back across the box by Rhyan Grant to Ninkovic but the Serbian heads over.

22′ HOLOSKO CHANCE – Roar give the ball away to Holosko and the winger cuts inside before driving a shot over the bar.

37′ BOBÔ CHANCE – Hingert tries a backpass but gives it straight to Bobô who slips it just pass the post.

38′ BROSQUE CHANCE – Another shocking Roar back pass falls to Brosque but this time Theo saves it at close range.

52’ NORTH FOULS BROSQUE – Brosque is sent one on one with the keeper and is brought down by North but only a yellow is produced.

54’ O’NEILL FREE KICK – Brandon O’Neill curls one over the wall towards the top corner but Theo tips over the bar.

64′ NINKOVIC SHOT – A long throw is collected by Ninkovic who dances past two defenders before shooting but it’s saved by Theo at close range.

66’ BROSQUE SHOT – Great pressure from Sydney FC forces a corner from which the ball falls to Brosque who forces a save from Theo from close range.

77’ GRANT BOOKING – Rhyan Grant is booked for a trip on MacLaren and controversy follows as many people inside the stadium feel that he has earlier been booked for a foul on Broich (60th minute), however Milliner didn’t book him the first time.

95’ IBINI CHANCE – A long ball from Vukovic falls to Ibini but Theo is out of his box to block with his chest as the forward tries to take it around him.

Head Coach Graham Arnold kept the same starting line up to the one which defeated Perth Glory six days earlier with Bernie Ibini returning to the bench for the first time in the A-League this season and Tomas Manos coming in as substitute goalkeeper.