Four goals aside, there were plenty of other things to be pleased about from the Sky Blues’ performance in the #SydneyDerby at ANZ Stadium.

From flowing forward play to a stoic defence, we look at the key stats from Saturday night’s record breaking victory that saw us stretch our undefeated record to eight matches against our crosstown rivals.

The Sky Blues’ win was built from the defensive line up, with captain Matt Jurman marshalling the back four with aplomb.

In total, the Sky Blues made 19 tackles, completing 84.2% of them, while making 28 clearances to protect Danny Vukovic in goal.

Matt Jurman was a standout, with the centre half making four interceptions, completing five out of six of his ground duels and winning all four of his aerial duels in a dominant display.

Central midfield was commanded by Brandon O’Neill and Joshua Brillante, with the pair consistently breaking up Wanderers attacks to launch our own.

In total distribution, the Sky Blues made 399 passes and peppered the Wanderers penalty area with 14 crosses, with the squad carving out eight chances in the opposition’s half.

The rekindled partnership between marquees Filip Holosko and Bobô was on full display at ANZ Stadium as the pair assisted in each other’s strikes to put the Sky Blues’ ahead by two goals 10 minutes after the restart. 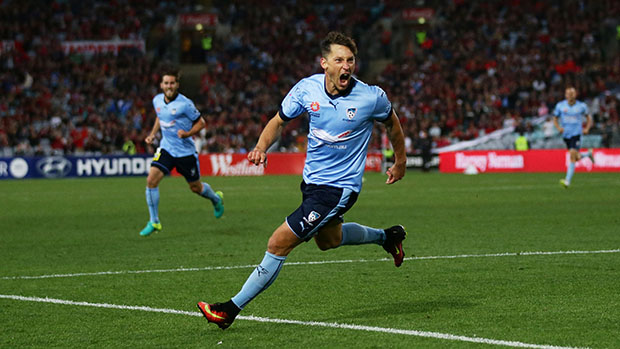 Sydney FC fired 12 shots at the Wanderers goal, with seven of those on target, as the Sky Blues attacking trio of David Carney, Bobô and Filip Holosko threatened time and again.

Holosko and Bobô shared five shots at goal between them and created a further four chances aside from their assists, with the duo shaping up to be a threatening strike force in the Hyundai A-League this season.

The Sky Blues will look to build on these numbers in their first home Hyundai A-League game of the 2016/17 season against the Central Coast Mariners this Saturday. Get your tickets today and arrive early to catch a pre-match screening of Ice Age: Collision Course.