A depleted Sydney FC squad earned a well-deserved draw with the Brisbane Roar on Saturday afternoon as goals to Tameka Butt and Jasmyne Spencer saw the points shared at Lambert Park.

Tamkea Butt opened the scoring for the Queenslanders early in the second half in what was a tense midfield battle between the two sides, before Spencer’s fantastic strike in the 85th minute earned a share of the spoils.

The Sky Blues started off strong as Chloe Logarzo flashed a ball just too far in front of Spencer in the opening minute before Bolger saw an effort deflected wide seconds later. However the Roar clawed their way back into the contest and threatened on more than one occasion as Alyssa Harris made a number of fine stops in the Sydney FC goal.

Neither side could carve out any clear cut opportunities as they went in at the break level before Butt opened the scoring with a neat finish in the 65th minute. The Sky Blues fought back and Spencers’ long range effort ensured the Sky Blues remained second on the table ahead of their trip to McKellar Park and Canberra next Sunday 9th of November. 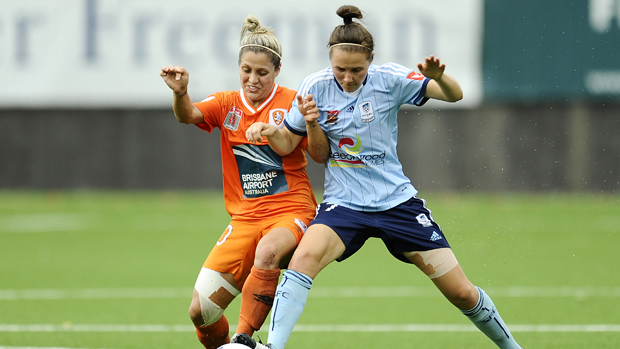 Dan Barrett: “That’s exactly what I expected. When you play Brisbane it’s always going to be an arm wrestle. Credit to our girls, the keeper made saves where they were needed to be made and our striker does what she’s there to do which is get us a very valuable point today.

“Jasmyne hates losing and she really steps it up and it’s a credit to her. She just fights even harder, not all players at all times can create those special moments but she’s one of those players that can and it’s so good to have her in our side.

“It was a tough week this week with our Young Matildas going away and we lost our keeper in the warm up so extra credit to Alyssa for stepping up. We stayed in things when they weren’t looking like going our way all the time and we still fought hard. We were ten times better than last week.”

Samantha Johnson: “I was really proud of the girls effort after going down a goal. We were at our home ground and we know how much it means to get a point.”

Alyssa Harris: “We were doing the warm ups and then I got the call so it was a bit nerve racking at first but was good to start. I played in Perth so that got some of the nerves out but to start is different obviously. It was pretty stressful but we played really well. We had a slow start but once we started to protect the ball a bit better it worked a lot better for us.”

65’ BUTT GOAL – A lovely ball finds Tameka Butt on the edge of the Sydney FC area as she beats the offside trap, takes two touches and calmly slots the ball past an onrushing Alyssa Harris into the back of the net.

85’ SPENCER GOAL – A long free kick from Renee Rollason in the Sky Blues half finds Spencer up front. She controls the ball on her chest, letting it take a bounce, before swivelling and volleying into the top corner from 30 yards out.

1’ LOGARZO BALL – Chloe Logarzo breaks down the left side before flashing a ball just too far in front of an onrushing Jasmyne Spencer.

2’ UZUNLAR SHOT – After a Nicola Bolger effort is deflected for a corner, Servet Uzunlar pops up at the far post but blazes her shot just over the bar.

12’ HARRIS SAVE – Tameka Butt springs the offside trap however Alyssa Harris makes a fantastic stop as she dives low at Butt’s feet to smother the ball.

28’ BUTT HEADER – Tameka Butt fires a bullet header at Alyssa Harris off a Brisbane Roar corner but the Sydney FC shot stopper does well, making a diving save to tip the ball around the post after it took an awkward bounce.

32’ SPENCER CHANCE – A sweeping ball from Rollason finds Spencer in the area who takes one touch but then volley’s over the bar.

38’ ALLEYWAY HEADER – Laura Alleway pops up highest from a Brisbane Roar corner but fires her header high over the bar when well placed.

50’ GOAL MOUTH SCRAMBLE – A Roar corner is fired into the box where the ball is ping-ponged around the area with no one able to turn it into the net. The Sky Blues get the reprieve when Alyssa Harris earns a free kick.

60’ UZUNLAR SHOT – Chloe Logarzo threads through Servet Uzunlar however the Matilda side foots her effort wide.

68’ GIELNIK CHANCE – Gielnik is released in similar fashion to the build up for the Roar goal, however she fires wide when one on one with Harris.

82’ PLESSAS EFFORT – Debutant Georgia Plessas finds time and space on the edge of the area however her low drive is held by Stewart at the second attempt.

90+3’ SPENCER CHARGE DOWN – Jasmyne Spencer charges down Stewart’s clearance however the ball bounces harmlessly wide of the empty net. 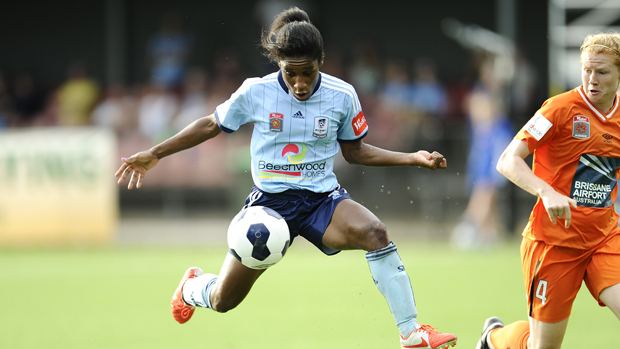 Head Coach Daniel Barrett was forced to make a number of changes to his squad as he lost Amy Harrison, Olivia Price and Natalie Tobin to international duty. This paved the way for new comers Melissa Caceres and Georgie Plessas to appear on the bench with Elizabeth Ralston earning a starting role after her substitute appearance against the Western Sydney Wanderers in the previous round. Barrett was forced into a late change of goalkeepers with Sian McLaren dropping to the bench with a calf complaint allowing Alyssa Harris to make her first start of the season.

BECOME A W-LEAGUE MEMBER TODAY! – Sydney FC’s W-League squad would love your support again as they strive to regain the W-League Championship. See the girls play for just $75 or for the discounted price of $45 if you’re a current A-League Member.